More than half of drivers believe the condition of local roads has deteriorated in the past year despite the drop in car use due to the pandemic.

The RAC Report on Motoring found the poor state of local roads is officially the UK’s most widespread motoring concern in 2020. 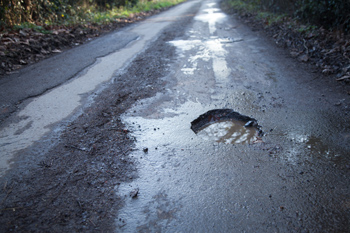 Only 6% of motorists felt the state of local roads has improved the last year, compared to 11% the year before.

RAC head of roads policy Nicholas Lyes said: ‘Usually, RAC patrols see the fewest number of pothole-related breakdowns in the third quarter which coincides with the summer, with volumes having dropped steadily from the high point recorded in the first three months of the year. This normally correlates with councils carrying out work to repair potholes in early spring that have appeared over the winter.

’But, faced with the early stages of the pandemic, local authorities might not have been able to keep up their planned maintenance programmes, possibly due to staffing issues, and local roads suffered as a consequence.'

Mr Lyes added: 'This also calls into question just how much progress has actually been made in fixing the 11 million "nuisance" potholes cited by transport secretary Grant Shapps in May.’

The annual survey by the RAC also shows 82% of motorists are in favour of having a proportion of current taxation put aside for spending on local road maintenance.