People working for Highways England have donated more than a tonne of food and other items to food banks helping tackle the effects of austerity.

Almost 1,000kg of items was collected by the teams maintaining the strategic road network across the East Midlands, while workers widening the A500 in Staffordshire delivered 37kg of goods to help people in need.

The donations came as the Trussell Trust, the UK’s largest food bank provider, revealed a 20% increase in the number of food parcels going to children over the summer holidays last year.

The trust said it expects demand this year to be as high as families miss out on free school meals. Staff from Highways England and the East Midlands Asset Delivery (EMAD) partnership organised collections at offices across the region.

They collected 156 tins of baked beans, 170 tins of tuna, 90 bags of pasta, 139 jars of cooking sauces, 155 tins of vegetables, 40 boxes of tea bags, 79 toilet rolls and over 300 nappies. The collections were divided between three food banks in the region.

Highways England assistant contract collaboration manager Nicola Tomlinson said: ‘This fantastic contribution from all of our suppliers really does take working collaboratively to the next level. I’m astounded by the generosity of the workforces and hope our donation will make a big difference to families in communities across our region.’

Gareth Duffield, the Trussell Trust’s area manager for Birmingham and Northern Counties, said: ‘We’re so glad food banks in our network could benefit from the collection organised by Highways England to help support people facing crisis. We have seen a record demand in food bank use in the past decade, with more and more people struggling to afford the basics. This isn’t right.’ 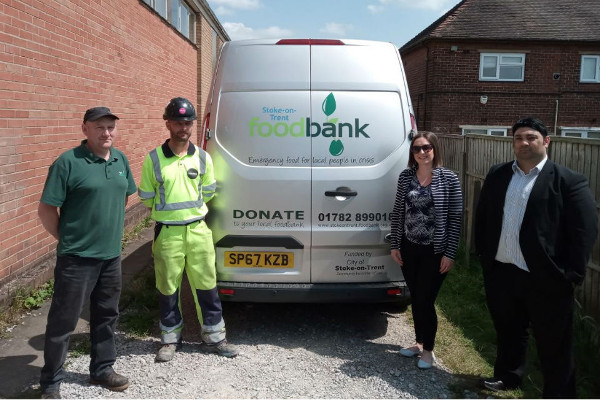 In Staffordshire, members of the Highways England and Osborne A500 Etruria Widening Team recently dropped off a delivery of food to the Stoke-on-Trent Foodbank, part of the Trussell Trust network (pictured).

A collection box has been set up at the site office and the first delivery was made just before the schools broke up for summer. Collections will continue over the duration of the scheme, due to finish autumn 2020.

The road is being widened from two to three lanes in both directions between Porthill (A5271) and Wolstanton (A527) as part of a £17.5m upgrade.