Highways England is trialling 60mph speed limits on short sections of its network to bring air pollution within legal limits.

The government-owned company said it expects this will achieve a reduction in Nitrogen Dioxide (NO2) but is testing this. It will monitor the trial and if it succeeds, the speed limit will remain in place until the area is compliant by other means. 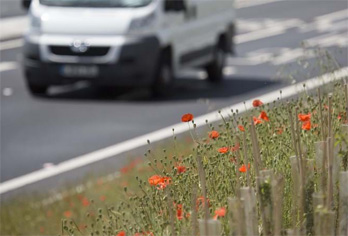 Vans and other diesel vehicles are a major source of NO2

It added that it has been investigating the effects that different speeds and driving styles have on vehicle emissions and that its modelling and research and collaboration with other road operators shows that lowering the speed limit to 60mph is the most effective emissions reduction option.

The speed limits will be operational 24 hours a day. Highways England said the restrictions need to be in place around the clock as emissions are measured as annual mean figures.

Highways England head of environment Ivan Le Fevre said: ‘Ultimately the air quality challenge will be solved at the tailpipe by vehicle manufacturers and changes in vehicle use. Until this happens we will continue our extensive programme of pioneering research and solutions.

‘The speed limits trial will stay in place until the shift to cleaner vehicles means we can remove the restrictions and maintain cleaner air.’

Highways England said it is proposing to introduce speed restrictions at four locations that were identified as having NO2 levels above the legal limit annual mean limit level of 40 µg/m³.

A further four locations with poor air quality already have reduced speed limits in place for other reasons:

Highways England said its modelling and research has forecast that emission levels will be within legal levels by the time the roadworks are removed.