Key voices in the infrastructure sector have celebrated an ambitious Budget, which provided a much-needed confidence boost with hundreds of billions of pounds pledged.

Chancellor Rishi Sunak said that over the next five years, the Government 'will invest more than £600bn in our future prosperity' adding that capital budgets in 2024-25 alone will reach over £110bn.

'We are investing in world class infrastructure, and to lead the world in the industries and technologies of the future. The central judgement I’m making today is to fund an additional £175bn over the next five years for our future prosperity,' the chancellor said. 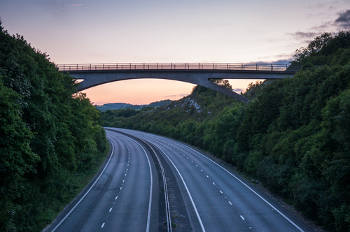 The full details of the investment in key areas are still to come with the National Infrastructure Strategy due later in the spring.

Steve Spender, chief executive of the Institute of Highway Engineer, said: 'The statement of a £2.5bn fund for dealing with potholes is welcomed, and we hope that initial details of how this will be distributed over the coming years will be forthcoming. The effects of the extreme weather over the previous month or so is not yet fully known, and will not be evident until the current levels of flooding subside, and even then it will possibly be a few months before the real level of deterioration will manifest itself.'

'We are particularly encouraged by today’s announcements on five-year funding settlements for city leaders to invest in local transport improvements, and by the additional investment in electric vehicle charging points, both of which are in line with our National Infrastructure Assessment recommendations.

'We also welcome the additional funding for boosting flood protection, though we have repeatedly argued for this to be complemented by the introduction of a national flood resilience standard.

'These new commitments, among others, are important ingredients, and we look forward to seeing the whole recipe in the Strategy later this spring.'

Graham Wright, EY infrastructure tax partner, said: 'Despite saying relatively little about the detail of the promised infrastructure revolution, the chancellor has delivered a further confidence boost to investors and the construction sector today. Hopefully, this will kick-start a continuing trend of renewed investment and activity.'

Andrew Hugill, director of policy and technical affairs at the Chartered Institution of Highways and Transportation, said the Budget had offered 'a clear response to our calls for the Government to provide a vision and certainty for the sector on key projects and programmes'.

However, he added that 'significantly' more cash was needed to truly have a resilient local highway network.

He said: 'Our ‘Improving Local Highways’ project which will launch next week, will show how this can be implemented effectively. CIHT believes that the [comprehensive spending review] CSR later in the year is an opportunity to ensure that we formalise a clear vision and strategy that sets out how transport will contribute to key policy areas.

'We will be looking to work with the Infrastructure and Projects Authority as they look at supply chain capacity and how industry can best deliver the government’s ambition.'

Anthony Smith, chief executive of the independent watchdog Transport Focus, said: 'It is good news that our independent survey will be the official measure of road user satisfaction for Highways England’s roads from next month.

He added: 'It is urgent that road users now hear when a decision will be made on the Government’s smart motorway evidence stocktake.'