Roads minister Jesse Norman has warned that ‘we have no time to lose’ as emerging technologies bring the chance to mitigate the mixed legacy of the 20th century motoring boom.

Speaking at an event last week, Mr Norman (pictured speaking below) acknowledged that the word 'historic' is ‘wildly over-used’ but added: ‘I think it is fair to say we are at a genuinely historic juncture for transport in this country.’

He said that while we can think of the 19th century in terms of the coming of the railways and the 20th century through the effects of the car and the changes it created: ‘I want to suggest in the time-honoured fashion that we are on the cusp of something extraordinarily interesting, by way of a transport revolution for the 21st century.’ 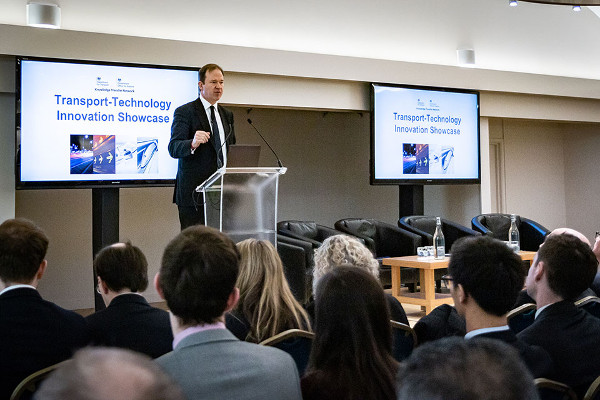 Mr Norman, whose portfolio also includes active travel, said the impact of the car was that ‘travel was democratised’ but acknowledged that it had ‘imposed huge externalities’.

‘Huge costs imposed on other people or other communities or other places, costs that were deferred or pushed onto others without any great recognition of what their effects might be,’ he said.

He added: ‘One of the worries I have is this: what does it do to an already individualistic society when someone is in a car in their own demarcated space surrounded by their personal area of control and not mixing with other people?’

Stressing the need to ‘maintain a sense of history’, Mr Norman acknowledged that ‘the 20th century motoring boom left us with a mixed legacy - something in many ways to be excited about and proud of, but something that also contained real worries for the future’.

He said: ‘As we think now about the transport technologies of the future - electric cars, hydrogen power, autonomous vehicles, drones, the use of big data across the whole range of transport - we understand so much more about the complex interactions between transport and everything around it.

‘This time, we can be much more explicit and self-conscious about the moral and political choices that come with those decisions.’

Describing the belief of 18th century philosopher Edmund Burke that society is something that each generation must improve and pass on to future generations, he said: ‘This is a Burkean moment for transport. We need to work out what we think about that, why it matters, what the drivers of change are, and how we can build a consensus that can sustain itself over time.’

He acknowledged that: ‘We’ve already placed some significant limits on the use of internal combustion engines in transport, to control its harmful side effects. Now we have to decide what we want from emerging vehicle technologies.

‘How can we use policymaking to support wider goals of clean air, higher productivity, and more sustainable economic growth? And how do we bring these new technologies to market?’

His conclusion suggested: 'We will move, if we do it right, from siloed thinking to a more integrated approach - integrated in terms of technology, geography, economics, sociology and culture.'

And perhaps intergated between past, present and future, individual and society.

Up to £41,634 per annum
We are looking for a Traffic Engineer to help support traffic flows across Watford and keep our roads moving. Watford, Hertfordshire
Recruiter: Watford Borough Council

£31,371.00 - £33,799.00 Annually
Darlington continues to attract new and exciting developments increasing the ambition of the town and the living standards for all of its residents. Darlington, Durham
Recruiter: Darlington Borough Council