The condition of roads is now motorists’ top concern as nearly four in five rate them as poor, according to a major study of drivers’ attitudes.

According to the RAC’s Report on Motoring 2018, the state of local roads – in particular, road surface quality and potholes – has become the most frequently cited gripe among Britain’s motorists.

In this year’s survey, 42% of motorists said the condition and maintenance of local roads is one of their four main concerns, compared to 33% in 2017, with one in six (17%) saying it is their main concern.

In addition, 78% of motorists rated the state of both local and strategic roads as ‘generally poor’, with two thirds (66%) saying the condition of their local roads has deteriorated in the past year, and two in five (40%) saying the same of major roads.

More than four in five drivers (83%) said they wanted to see a proportion of the motoring taxes they pay ring-fenced to fund maintenance of local roads.

The second most common concern was drivers’ use of handheld mobile phones, with 38% citing it as a concern, down slightly on 40% last year. 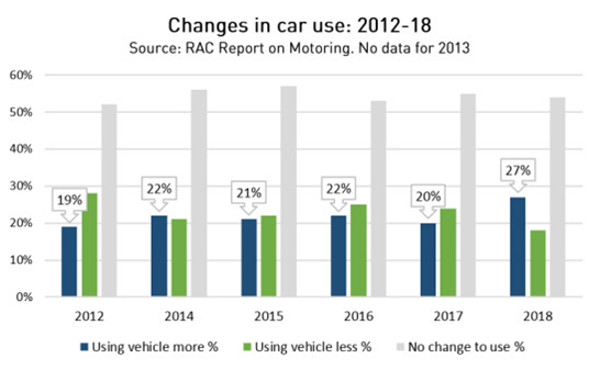 In 2018, 27% of motorists said they are using their cars more than last year, with only 18% saying their use has reduced. This follows three years where drivers on the whole reported using their car less.

Similarly, a third (33%) of drivers said they are more dependent on their car now than a year ago, compared with 27% who said this in 2017. Of those who are driving more, 24% blamed a deterioration in public transport services.

RAC chief engineer David Bizley said: ‘At a time when there is so much effort being put into tackling air quality issues and congestion, it is alarming to see that dependency on the car is actually the highest we have ever seen.’

While only 12% of drivers cited the environmental impact of motoring as a top four concern, 44% said they are more concerned than a year ago about the impact of vehicles on local air quality  – up 4% since 2017.

More than half of respondents (52%) said the Government is unfairly targeting diesel drivers as a key source of air pollution while a similar number (47%) said they are unsure whether new diesel vehicles are bad for the environment.