Transport for London (TfL) has ‘completed’ the £1bn contract for the controversial Silvertown Tunnel under the Thames in east London, despite an ongoing legal challenge.

The transport authority announced in May that it had awarded the PFI contract to the Riverlinx consortium, comprising Aberdeen Standard Investments, BAM PPP PGGM, Cintra, Macquarie Capital and SK E&C, with work due to start this year.

However, the contract was automatically suspended following a legal challenge by a rival bidder. In October, TfL successfully applied to court to lift the suspension.

It has now announced that it has signed and financially completed the contract, allowing work to begin next year, although TfL is sticking to a prediction that the tunnel will open in 2025.

Stuart Harvey, director of major projects, said: ‘Following detailed discussions, we have now completed the contract for the Riverlinx consortium to design, build, finance and maintain the Silvertown Tunnel.

‘Once open in 2025, the tunnel will provide new cross-river bus routes in east London and during its construction we will work tirelessly to ensure that any disruption to local residents or businesses is kept to an absolute minimum.’ 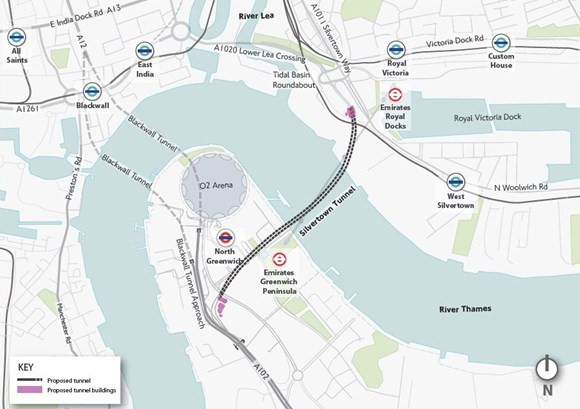 The tunnel will cross from the Greenwich Peninsula to Silvertown

With campaigners arguing that the twin-bore road tunnel will add to traffic, TfL stressed that it will provide new cross-river bus routes in east and south London, while a planned user charge (on both the new tunnel and existing Blackwall Tunnel) ‘will ensure overall traffic volumes do not increase’.

It added that the Design, Build, Finance and Maintain contract means financial risk for construction and an initial maintenance period will sit with the private sector, ‘allowing TfL to continue to invest in public transport improvements across London’.

Payments to the consortium will only start once the tunnel is open and these can be reduced should the tunnel not meet certain key standards, such as availability for use by traffic and physical condition.

TfL has come under criticism over air quality issues around the tunnel.

The authority said that in line with the commitments enshrined in the Development Consent Order, it will also undertake further air quality modelling, monitoring and, if required, appropriate mitigation efforts to ensure the outcomes are not materially worse than were forecast in its Environmental Statement.

This looks like @SadiqKhan is trying to bury bad news in the middle of an election campaign. Not a good look. But people in south east London will notice and are worried about the extra traffic and air pollution wrongly being directed through their community.