Highways England has announced its delayed £1.4bn plans to improve the Black Cat to Caxton Gibbet route, which includes one of the East of England’s most congested junctions.

A new triple deck junction will be built at the Black Cat roundabout in Bedfordshire (pictured), with a new 10-mile dual carriageway linking the junction with the Caxton Gibbet roundabout near Cambourne in Cambridgeshire. 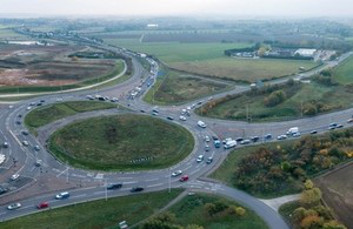 There will also be a new junction at Cambridge road and new bridges, while the existing A428 will become a local road between St Neots and Caxton Gibbet.

Highways England said the route comprises the most popular options from a 2017 consultation and combines the best mix of benefits. The chosen options were referred to at the consultation as the Orange Route and Option C respectively.

Project lead Lee Galloway said: ‘As well as significant improvements locally, the project will be a vital component in improving the regional and national road network. The improvements will complement our £1.5bn A14 upgrade and form part of a wider transformation of road links between Cambridge, Milton Keynes and Oxford.’

The Government-owned firm said the scheme is valued between £810m and £1.4bn, and is being funded by the Government’s (current) £15bn Road Investment Strategy (RIS). Work was initially due to start in 2019/20 but last year Highways England announced a two-year delay.

The route announcement was then expected by the end of last year.

Highways England has now said that, subject to statutory processes, main construction work on the upgrade ‘could' start before April 2022, well into the next RIS, following a further, more detailed consultation this year and a planning application, expected in 2020.

Sub-national transport body England’s Economic Heartland has repeatedly criticised delays to the scheme. Its progrmme director, Martin Tugwell, has told Transport Network that they expect the new route to be open 'around 2022/23'.

The A428 between the A1 at Black Cat and the A1198 at Caxton Gibbet is a single carriageway with a series of roundabouts and give-way junctions. Highways England said it experiences severe congestion and delays during peak periods or if there is an incident in the wider South Cambridgeshire area.

It said the improvements will cut the average peak time journeys between Black Cat and Caxton Gibbet by more than a third – around a 10-minute saving on every trip.

The firm said retaining the existing A428 for local traffic will offer significant benefits for communities along the route, while four new routes for pedestrians, cyclists and equestrians will maintain and improve access across the new road.