Bristol City Council has unveiled three different design concepts for the transformation of the road network at what it calls ‘an iconic waterside gateway’ to the city.

It is asking for feedback on changes to the 'ageing' Cumberland Basin road system (pictured), which it said could unlock a new and enhanced ‘Western Harbour’ area with homes, shops and green space. 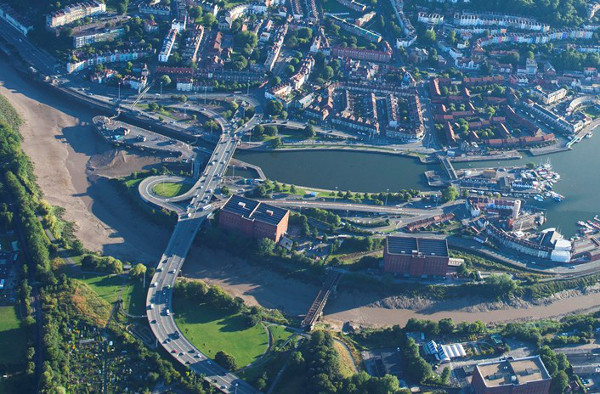 The road system, which links Hotwells and Spike Island, the A4 and the A370, features bridges and flyovers built in the 1960s, which the council said are now in need of significant investment.

Three new ideas are being considered to create ‘a simpler, less intrusive road network’. The council said this could release space for a mixture of new homes, retail and leisure developments, plus high quality public open space and new walking and cycling routes.

City mayor Marvin Rees said: ‘We have a real opportunity to rethink the ageing infrastructure in the Western Harbour area and by doing so, create a new area for homes including much-needed affordable homes.

‘At the very heart of our One City vision for Bristol is building sustainable, vibrant and inclusive neighbourhoods. To achieve this we must ensure everyone is well connected, with easy access to homes, employment and other essential services.’

Mr Rees said there was a lot more work to do before detailed options are designed, but said: ‘This very early stage is the right moment to share where we have got to with the community and start a conversation about this opportunity with everyone in Bristol.’

The council said it has estimated that at least £40m would be required to bring the ageing infrastructure up to standard and allow it to remain in use. This would need new bridge movement equipment, reinforcement of elevated structures, as well as general maintenance and condition surveys.

It commissioned consultants Arup, Alec French and JLL to undertake an initial feasibility study in 2018 to consider ways to reconfigure traffic movements in the area. From the initial assessment looking at how to regenerate the area and consider traffic flows, three proposed approaches have been explored in more detail.

All three would see the the existing Plimsoll Swing Bridge (dual carriageway) and all elevated road structures demolished. The three approaches are:

Western – create a new road on the western bank (Ashton Court side) of the River Avon between the Portishead rail line and the river. With a new bridge included, it would provide two lanes in each direction and would require works to the river bank. Traffic travelling between the north and south of the River Avon would use this new road. Within Hotwells there would be the opportunity to retain the existing one-way system or modify it to create two-way streets.

Eastern – consolidate all the river crossings onto the eastern side of the Cumberland Basin. To create sufficient road capacity, the existing Merchants Road Bridge (lower bridge) would be replaced by a new four-lane bridge across the Basin and a new bridge crossing over the Avon, near A Bond warehouse. A new junction would be created with the A370 Jessop Underpass and A3029 Brunel Way.

Hybrid – combines elements from the Western and Eastern approaches. It would create a new road, providing one lane in each direction on the western bank of the River Avon, accessed via a new bridge (south of the suspension bridge). This road would only be used by vehicles travelling between the A4 Portway and Ashton Gate, Bedminster, Southville and Long Ashton, as well as the A370 or A38 (to the south). It also creates a new bridge crossing over the Avon (near A Bond), connecting Bedminster to Spike Island. The stretch of Merchants Road between Hotwells Road and Merchants Road Bridge would be made two-way (currently one-way). Merchants Road Bridge would be replaced.

For full details and maps of the approaches, go to www.bristol.gov.uk/westernharbour.

After considering feedback from the survey, the council will seek approval from Cabinet later this year on the next steps involving a masterplan for the area and more detailed options which could be developed.