Transport for London (TfL) has named the Riverlinx consortium as the preferred bidder to build a new tunnel under the Thames in East London, with work due to start this year.

The controversial Silvertown tunnel, which is set to be open in 2025, will link the Greenwich Peninsula and the Royal Docks.

The project will be procured through a Design, Build, Finance and Maintain contract, meaning the financial risk for construction and an initial maintenance period will sit with the private sector rather than TfL‎.

Payments by TfL will only start once the tunnel is open and available for use. There will be a user charge at both the new tunnel and the existing Blackwall tunnel, despite mayor Sadiq Khan’s criticisms of the proposal prior to his election.

The charge will both fund the construction and maintenance costs and help to manage traffic demand and journey reliability, TfL said. 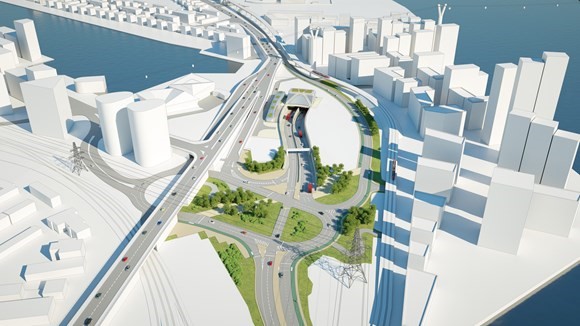 Both tunnels and the surrounding area will also fall within the expanded Ultra-Low Emission Zone.

The transport authority said the private financing model ‘reflects the fact that TfL receives no ongoing investment for roads from the Government’ and ‘has no dedicated income stream to pay for capital roads projects like this’.

It added that funding the project this way shifts financial risks onto the private sector and incentivises them to deliver the scheme as efficiently as possible.

Alex Williams, TfL’s director of city planning, said: ‘The Silvertown Tunnel, which is vital to support London's economy, has been designed to resolve the existing congestion problem around Blackwall, improve overall air quality and enable new cross-river bus routes to be introduced.’

TfL claimed the twin-bore tunnel would 'effectively eliminate congestion’ caused by miles of standing traffic around the Blackwall Tunnel area and in doing so would deliver an overall improvement in air quality.

It added that at locations where its air quality modelling showed that there may be a small localised impact, mitigation will be delivered further 'to ensure any increase is minimised'.

TfL said the tunnel will also significantly improve cross-river public transport connections, with around 37 buses an hour in each direction using the tunnel, including the current six single-decker buses per hour which run through the Blackwall Tunnel.

All the new double-decker buses that will use the Silvertown Tunnel are ‘expected to be zero-emission from launch, TfL said.’

She said: 'We need more ways for people and goods to cross the river without using cars and vans. Although there is again mention of new bus services, we’re still in the dark on the cycle shuttle bus the mayor offered when attempting to "green" Silvertown in 2016.

'All that’s in today’s announcement are a few new bike racks, a pitiful figleaf for the massive increase in traffic and health-damaging pollution this toxic tunnel will bring. It has no place in a city that recognises we are in a climate emergency.'

Throughout the summer, the consortium will work to confirm financial arrangements with lenders and set up the supply chain. Only once these are all agreed will TfL award them the contract officially.

All contractors working for the Riverlinx consortium will also be required to deliver a range of measures to help reduce construction impacts, including: