The RAC foundation said the 353 local authorities in England received total income of £1.746bn from their on and off-street parking operations in 2018-19 while spending £816m on running parking.

‘What will surprise drivers is that even as parking income soars, the amount of money being spent on routine road maintenance by councils has been in reverse.’

Mr Gooding conceded that because the official numbers exclude the cost of servicing parking-related capital investment funded from borrowing, the surplus costs could be overstated for some councils.

Cllr David Renard, transport spokesman for the Local Government Association, said: ‘Any income raised through on-street parking charges and fines is spent on running parking services and any surplus is only spent on essential transport projects, such as filling potholes, supporting concessionary bus fares to help reduce congestion and other local transport projects that benefit high streets and local economies.’ 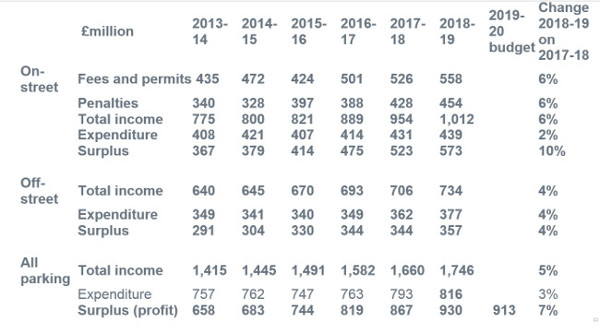 The analysis leaves out the £9.7m generated in Nottingham from the workplace parking levy and excludes the six national parks.

Of the 353 councils who returned parking figures to central government, only 41 reported a loss on their parking operations.

As in previous years, the largest profits are being made by councils in London.