Councils across the country have been battling to keep their highway networks operating safely as the most severe threat of snow moved from Scotland and the North East to Wales and South West England.

In Scotland, despite the Met Office issuing a rare red weather warning on Wednesday, hundreds of drivers were stranded overnight as snow brought the M80 motorway to a standstill. 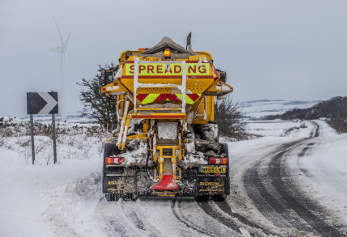 Durham County Council said on Wednesday that its gritter crews (right) had been working throughout the day and, following a break in the snow, had managed to clear many priority one routes.

It said the A68 between Tow Law and Castleside had reopened after a gritter that had slid off the road was successfully removed.

The council added that it had good salt stocks and with further deliveries due to take place, crews would continue to plough and treat these routes through the evening and into Thursday.

Westminster Council said on Thursday morning that, as of 6am, 220 tonnes of salt had been spread on its streets since Wednesday morning and that with the help of contractor Veolia it had gritted over 1200 roads across the city with priority routes gritted twice

Later on Thursday morning, the Met Office issued a revised red warning covering areas of South Wales, Somerset and Devon as Storm Emma moved into the South and South West, bringing damp air into contact with the ‘Beast from the East’ cold air from Siberia.

On Thursday afternoon Devon County Council closed the A380 Telegraph Hill from 3pm as a precautionary measure. It said it was working with partner agencies, such ast Devon and Cornwall Police and Highways England.

Cllr Stuart Hughes, cabinet member for highway management, said: ‘We’re forecast to get unprecedented levels of snow and because of that we’re having to take this preventative measure to ensure people do not get stranded on Telegraph Hill.

‘All of Devon County Council’s highways resources are being deployed with this snow event and snowfall is steadily increasing. Our priority is to keep the main road network moving as best we can, so we won’t have the resources to be able clear any minor routes.’

RED wind & snow @MetOffice warning for parts of Somerset, including #M5 between Taunton & Exeter. AMBER wind & snow warning for other parts of our area: https://t.co/ZtPSaexgN1#StormEmma pic.twitter.com/Jz6UT2Gkgx

Registration is now open for the 27th Annual Cold Comfort conference and exhibition.  The annual winter maintenance event takes place on 16th and 17th May at the Ricoh Arena Coventry. Register Today and take advantage of the Super Early Bird Discount.