Deaths on Britain’s roads fell by 16% last year but traffic levels were down 22%, meaning that fatality rates rose. The latest government figures also show a 40% rise in the number of cyclists killed.

The Department for Transport has published Reported road casualties Great Britain, provisional results: 2020, which shows that there were 1,472 fatalities in reported road accidents during the year, down from 1,752 in 2019.

Road traffic over the year decreased by 21%, impacted by the pandemic. As a result, fatality rates – measured per billion vehicle miles – increased by 6%. 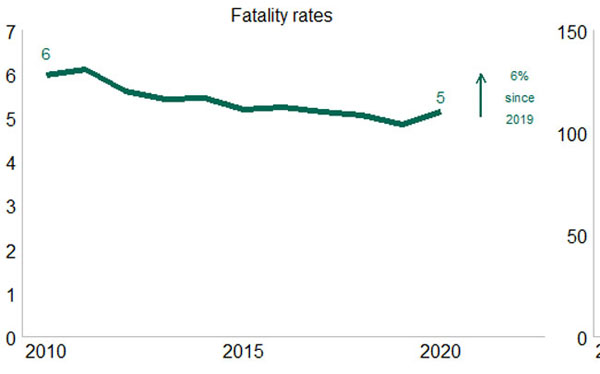 The fatality rate among cyclists fell by 4%, while overall casualty rates among cyclists saw the greatest percentage decrease (34%) compared to all other road user types.

AA president Edmund King said: ‘Predictably, the pandemic has seen fatal and serious collisions drop by more than a fifth compared to last year, but tragically more than 1,400 people were killed on the roads. If we are to achieve zero road deaths by the end of the decade, we must ensure this overall reduction is not a one-off.

‘It is staggering that with car traffic down to as little as 22% of pre-lockdown levels and the big increase in protected pop-up routes, the level of cyclist casualties was so high. This points strongly to the need for better engineering, more education and more cops in cars to help eliminate road deaths. We will continue to push our Think Bikes! campaign so that drivers take more care around cyclists.

‘Regardless of how we use the roads, we all have a responsibility to one another to ensure people can travel safely.’