Public borrowing is the usual way of financing new roads in Wales but, with several large schemes waiting in the wings, alternative funding methods are now being considered.

Wales has big ambitions to improve its transport system – ambitions that are greater than the funding available. As the Welsh Government prepares for the construction of the M4 Relief Road at Newport, many Welsh Assembly Members and others are concerned that at an estimated cost of £1.32bn – excluding VAT and inflation – this single scheme will preclude much-needed transport investments elsewhere in the devolved nation.

However, the Welsh Government is exploring other funding options including a new form of Public Private Partnership (PPP) [see Highways March 2018 page 6]. It is not ruling out paying for new infrastructure through user tolls – advocated by its former advisor, Professor Gerry Holtham.

There is probably nobody in Wales who believes the current situation on the M4 around Newport is acceptable. The road varies between three and two lanes. Widening is not feasible, not least because the route burrows beneath housing at the twin-bore Brynglas Tunnels. Peak congestion is a problem, and the frequent accidents cause major delays not only on the M4 but also on local roads to which traffic quickly diverts.

While there is consensus that the problem should be addressed urgently, opinions vary over the best response even within the ruling Labour Party. Some argue that a cheaper alternative route, largely using upgraded existing roads, would provide sufficient new capacity and reliability, but the Government argues that this route would run close to residential areas, where air and noise pollution would increase. Other opponents of the Government’s favoured scheme believe the solution lies not in road building but in reducing demand for travel on the M4 by investing heavily in improved public transport and encouraging more rail freight. 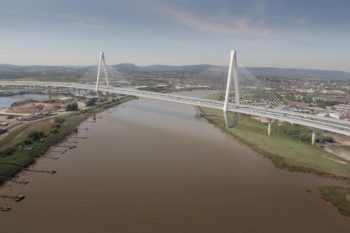 Critics also highlight increases in the preferred scheme’s cost. In December, the Government unveiled a package of additional mitigation measures to prevent the new road impairing the operation of Newport docks (pictured). Those measures are costed at £137m – more than the cost of some proposed bypass schemes. That sort of money could transform active travel rates in Wales, with consequent benefits for public health, if invested in facilities where anyone can feel safe cycling and walking.

Bus managers would argue that even a fraction of the £137m would do wonders for their industry, which suffered a 25% cut in Welsh Government grant in 2013 to £25m per year. Recent statistics show a 36% reduction in subsidised bus service kilometres in Wales from 2012-13 to 2016-17, reflecting pressure on local authority budgets. A £137m windfall would also of course allow councils to renew many highway surfaces and structures.

Also in the Government’s pipeline are several other trunk road improvements, notably a £200m scheme to connect the A55 to the under-utilised Flintshire Bridge. This would provide an alternative dual carriageway between Wales and England, relieving existing roads and sub-standard junctions.

Back in 2008, the UK and Welsh governments appointed Prof Holtham to lead a commission on Wales’ funding. From 2012 to 2014 he was the Welsh Government’s advisor on infrastructure investment.

Asked for his views on funding the M4 Relief Road and other transport schemes, he told Highways that he has no opinion on the optimal plan for the M4 scheme, but added: ‘I do think, however, that any such road should certainly be tolled.’

He explained: ‘It provides an alternative to an existing route, so no-one is obliged to pay the toll if they prefer to sit in a jam. There is scope for “smart” tolling whereby the price can reflect traffic conditions.

‘Why should the taxpayer finance the construction when road users, who benefit, can do so? The reduction or abolition of tolls on the Severn bridges creates room for such a toll. The Welsh Government is short of money and looking at possible new taxes. Tolling an M4 relief road is a better option than many other possibilities.’

When tolling was briefly mooted a decade ago, one of the drawbacks was that M4 users were paying high tolls to use the Severn Crossings, under the terms of the private concession that built the second crossing in the 1990s. The concession ended in January, and Highways England immediately reduced the tolls by removing VAT. The UK Government has pledged to abolish the tolls by the end of the year.

The Welsh Government is also progressing development of a third crossing of the Menai Strait, between Anglesey and the mainland. The forecast cost has increased from £130m to £200m, but in 2016 the Welsh Government revealed that it was pursuing the possibility of a joint scheme with the National Grid, which will require new power cables across the Strait if the proposed Wylfa Newydd nuclear power station is built on Anglesey. Transport secretary Ken Skates said a shared crossing ‘would massively reduce taxpayers’ contribution.

Prof Holtham, professor of regional economy at Cardiff Metropolitan University, supports this attempt to reduce the cost to the taxpayer. He said: ‘If they build a third Menai crossing, it should certainly be a joint venture not only with National Grid but [also] the company building Wylfa, who also stand to benefit.

‘Moreover, they should close the other crossing to commercial traffic above a certain size, obliging them to use the third crossing. It should then be tolled to finance the Welsh Government’s costs. Local users will, once again, have the option of using the old crossing. At present, lorries to and from the Irish Republic pay nothing for the use of Welsh roads and the wear and tear they impose. Here is a way to get them to do so.’

Although such a proposal might induce complaints from across the Irish Sea, Welsh ministers could point to the Republic of Ireland’s own road-user tolls – including several that cars and lorries have to pay near Dublin after leaving the Holyhead ferry.

Prof Holtham added: ‘The Welsh Government seem prejudiced against the use of road tolls but they should not be. Tolls provide a way to finance infrastructure investment more equitably, a way to discriminate in favour of public transport and a way to tax non-resident road-users who otherwise inflict costs that they don’t help to defray.’

Responding to Prof Holtham’s comments, a government spokeswoman said: ‘The ideas put forward by Prof Holtham are interesting. We will consider all proposals that could enhance the competitiveness of the Welsh economy and the infrastructure on which we depend.’

The Welsh Government also wishes to finish dualling the A465 across the Heads of the Valleys. Dualling the last remaining single-carriageway section is estimated at £428m, excluding VAT and inflation. The Government has developed a form of PPP called the Mutual Investment Model (MIM) to finance this, and some non-transport schemes, ‘due to a scarcity of capital funding’.

Private partners will take the risk on construction and the Government will pay a shadow toll. Ministers say the MIM is different from previous PPPs, since the Government will take up to 20% of the equity in the company set up to dual the road, giving taxpayers a share of the profits. A government-appointed ‘public interest director’ will sit on the company’s board to embed ‘transparency about costs, efficiency and performance, with requirements for regular review’.

Last year Plaid Cymru suggested that bonds might be a better way of borrowing the money. Finance secretary Mark Drakeford said bonds had been considered but added: ‘To date, I’ve not seen any convincing evidence that would suggest to me that bond financing would be a more effective way of securing the necessary investment to complete the dualling of the Heads of the Valleys road.’