A fixed transport link between Scotland and Northern Ireland will remain a pipe dream after analysis found that it could cost around 22 times Boris Johnson’s estimate.

A study by technical advisers Professor Douglas Oakervee CBE and Professor Gordon Masterton OBE gave indicative cost estimates for the full route of £335bn for a bridge crossing and £209bn for a tunnel crossing.

Two years ago, the prime minister estimated a cost of around £15bn for a bridge crossing. 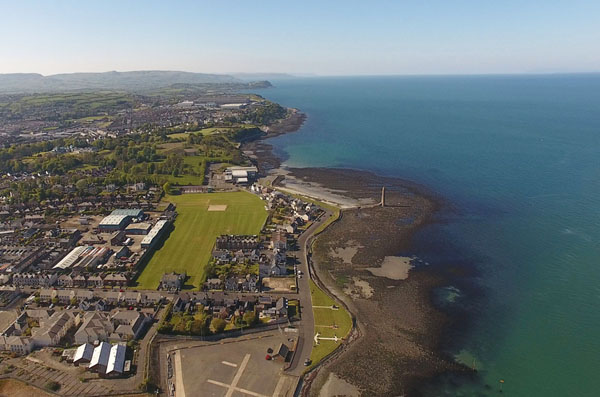 The idea for a crossing from Stranraer in Scotland to Larne in Northern Ireland (pictured) was initially part of Sir Peter Hendy’s Union Connectivity Review (UCR), launched in October 2020 and published last week.

In March Prof Oakervee and Prof Masterton were appointed to lead the study into the technical engineering feasibility of a fixed transport link as a separate workstream.

In the foreword to the study report, published alongside the UCR, Sir Peter was at pains to spare the prime minister’s blushes.

He wrote: ‘This in-depth, evidence-based assessment has concluded that cutting-edge, twenty-first century civil engineering technology would make it possible to construct either a bridge or a tunnel between Great Britain and Northern Ireland.

'A bridge crossing, however, would be the longest span bridge built to date. A tunnel would be the longest undersea tunnel ever built given the limited gradients on which trains can operate, the route it would need to take and the depths it would need to reach. In addition, based on today's technology and safety considerations, a tunnel crossing could only be constructed for railway use.

'The need for a railway on either a bridge or tunnel would also require significant construction to connect it to the railway network at either end, introducing some complexity since the Irish railway gauge is different from that of Great Britain. The consequence of these parameters for either a tunnel or a bridge is that they are expensive.’

Sir Peter added that planning, design, parliamentary and legal processes, and construction would take nearly 30 years before the crossing could become operational.

He added that ‘whilst the economic and social effects would be transformational, the costs would be impossible to justify'.

He concluded: ‘It is therefore my recommendation to Government that further work on the fixed link should not progress beyond this feasibility study. Despite my recommendation, I am clear that this was an excellent question to ask.’

Adopting the boosterish tone for which Mr Johnson is known, Sir Peter added: ‘Whilst I am unlikely to see such a link built in my lifetime, the march of technology, breakthroughs from UK infrastructure research, and ever-developing British engineering skills may yet be able to satisfy the ambition to join up Great Britain and Northern Ireland at an affordable price and timescale, and wise investment in UK research and development will bring this time closer.’