Highways England and TRL have launched a study into the benefits of different methods for approving road marking and road stud products, raising the prospect of reforms to the Manual of Contract Documents for Highways Works (MCHW).

The current procedure set out in the MCHW for the approval of road marking and road stud products on the trunk road network requires testing to be carried out by on-road trials. 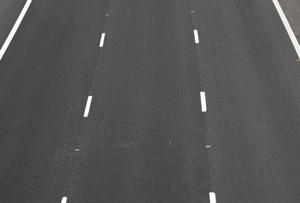 Products are assessed on a road test site for a pre-determined amount of trafficking, typically one million wheel-overs.

However, a new research study being carried out by TRL on behalf of Highways England suggests the government-owned company is considering changes to the system.

A TRL survey sent out to industry stakeholders, states: 'In order to allow more complete understanding of the methods available for the assessment of road marking and road stud products, Highways England, Safety Engineering and Standards, Safer Roads Design team has commissioned TRL to undertake a study into the comparative benefits of methods for approving road marking and road stud products.

'The results of this study will allow informed decisions regarding the ongoing approval of road marking and road stud products for use on the trunk road network in the UK.'

It has been well over a decade since the leading trade association in the markings sector, the Road Safety Markings Association (RSMA), last carried out on-road trials.

The latest plans for a road trial project between the association and Highways England have suffered major delays after years of talks going back to 2016.

Writing recently in Highways magazine, Highways England celebrated the success of its Transforming Road Markings Competition, where applicants were asked to send samples of their product for testing.

The 36 entries were tested in an 'industry-recognised' facility in Madrid, Spain, where the road marking materials were subjected to two million wheel overs.

Following this, the leading products underwent a live trial on the M5 in the South West. The testing started in March 2019 and continued until last month, when Highways England was due to start analysing the results.

Acting Highways England chief executive, Nick Harris, told Traffex: 'We have already built a great track record for innovation delivering improvements in safety, productivity and customer benefits. For example we are working on improving the road user experience by changing the materials of road markings making them more reflective and also so they don't damage the carriageway when we remove them so they don't leave ghost markings.'