Highways England and a select group of partners are joining forces to create an automated system for laying traffic cones.

Two automated cone laying vehicles are being developed with testing due to get underway next month at a centre in Lutterworth, Leicestershire. 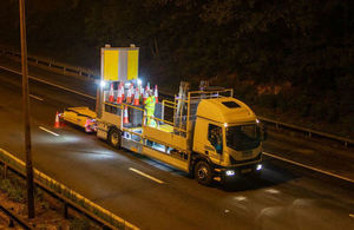 If successful the project could have huge safety benefits and prevent workers having to lift an average of 10 tonnes of equipment per shift, Highways England said.

Highways England Group Leader Martin Bolt, who oversees innovation in the Midlands, said: 'By taking out the human element in the laborious task of putting out cones, we will be taking out an element of potential risk. As well as taking away this physical labour, these automated machines could also save valuable person-hours and allow us to redeploy the workforce to other traffic management duties.

'We are delighted to be working with all of our partners to create an innovative vehicle that will make this possible.'

Experts from Highways England, contractor Kier, HW Martin Traffic Management and competitors Highway Care and King Highway Products are part of a collaborative project team. If the tests prove successful the two companies will be able to take their vehicles to the marketplace.

Highways England is funding the development with £1.27m from its Innovation Designated Funds programme.

The automated cone laying machines could be in use by the end of the year.

Highways England stipulates that the machines should offer a safer method for highways workers and all road users, and they must also be able to lay/collect at least 400 cones at a rate of one every 10 seconds.