Highways England has called for changes to Heathrow’s plans to build its new runway over the M25, including addressing the risk that aircraft will distract drivers.

Using the Freedom of Information Act, The Times obtained a number of reports from the Government-owned company, assessing the airport’s plan to move the M25 carriageway around 150 metres to the West, lower it by approximately seven metres into a tunnel and raise the runway height by three to five metres so that it passes over the motorway. 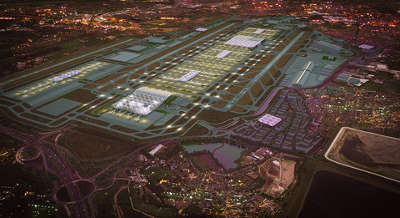 In one document, Highways England advised the airport: ‘Consideration must be given to measures to reduce driver distraction as a result of the runway crossing the M25 and associated aircraft movements both on taxiways and take-off and landings. Measures which reduce decision making for motorists in this location should be considered.’

In a statement, Highways England said it had been clear throughout that Heathrow's proposals for the M25 and the wider strategic road network are ‘deliverable given appropriate mitigation’.

Its network planning director, Jeremy Bloom, said: ‘Our engagement with Heathrow Airport Limited has been productive and has focused on seeking to agree solutions that consider both the construction and long-term operation and maintenance of proposed changes to the strategic road network.

‘We're also ensuring that the proposals can complement our own plans for improving this section of the M25.’

The Times reported that the assessments, which Highways England said it will publish shortly, warn that: