Civil Engineering firm Jones Bros has started highways and drainage works on the next phase of a 150-acre business park in Cheshire.

The contractor has been appointed by the developers of the Cheshire Green Industrial Park to design and construct a 1km spine road through the development, as well as the junctions to each of the 10 units. 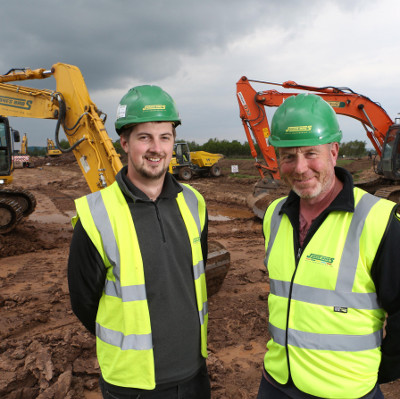 As part of the highways project, the firm will install a drainage system and carry out kerbing, surfacing, and landscaping.

Project manager Gareth Jones said: It’s exciting to carry on playing a role in the construction of Cheshire Green, and we’re looking forward to seeing it develop in the coming weeks and months.

‘We have a team of 20 on site including general construction operatives, plant operatives, engineers, and trainees, with the project set to finish in early 2020.'

He added: ‘It’s providing our workforce with a slightly different viewpoint of a highways project because we’re working on a disused airfield. The site is flat, which presented a challenge to design a drainage system that allowed for surface water to drain away correctly and effectively.

‘To overcome this, we are installing deeper drainage, up to seven metres deep in some sections, compared to typical projects which are between one and two metres deep.

‘In addition, we are working in close proximity to a canal, so we are taking extra precautions to avoid contamination.’

The contract win continues Jones Bros’ working relationship with Cheshire Green following its construction last year of a roundabout that provides access from the A51 to the £100m industrial park.

Phillip Posnett, director of the developer, said: ‘Jones Bros was fantastic to deal with for the roundabout, and I’m confident their quality of work will come to the fore once more with the construction of the spine road.’

Established in the 1950s, Jones Bros is being run by the second and third generations of the founding family and employs more than 350 people.