Kier Highways has installed three large cantilever gantries on a smart motorway project over a nine-night period while the motorway remained open.

A team of 57 people worked each of the nine nights to install the gantries, along with six smaller MS4 gantries and 28 lighting columns. 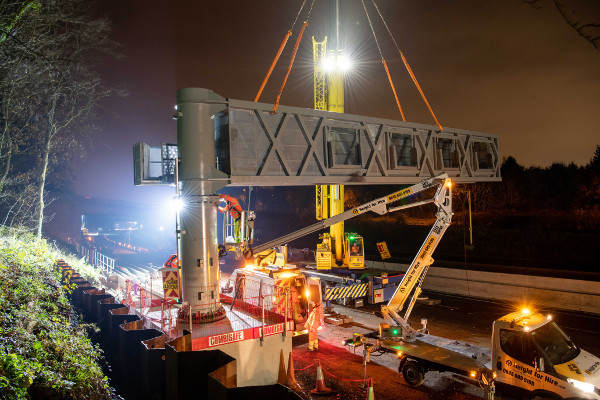 The large gantries, 18m-wide and weighing 24 tonnes, now span the carriageway on the M6 northbound between Junction 14 (Stafford) and Junction 15 (Stoke) and were installed with a contraflow in operation.

This allowed one lane of traffic to stay on the motorway, travelling north on the southbound side, while southbound traffic ran in three narrow lanes.

Drivers were able to continue on their preferred route instead of being diverted along sensitive diversion routes around Stafford.

Kier said the M6 Junction 13-15 all lane running project is the first of its kind to operate under a full contraflow for the length of the works. Implementing this was 'continuously increasing customer satisfaction through the roadworks', the company said.

Richard French, project director at Kier Highways, said: ‘We are coming to the end of a section of work on the northbound M6 and this critical activity makes the end date significantly closer.

‘All teams have planned their activities meticulously and collaboratively so that the result is completion to plan and on programme. There is a large amount of personnel involved and I would like to thank everyone for their solid performance during this complex activity.’

As work moves to the opposite carriageway, the contraflow operation will switch in the New Year.