London mayor Sadiq Khan has celebrated a Court of Appeal victory for his flagship Streetspace programme - designed to reduce motor traffic across the capital and boost active travel - in the face of fierce opposition from taxi drivers.

The mayor said the Court of Appeal decision, which was focused on a scheme in Bishopsgate though has wider ramifications, was 'a vindication of our policies'. 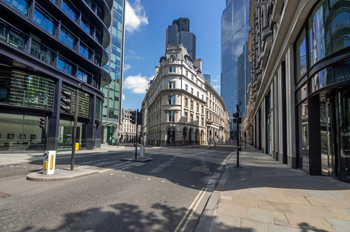 In January, Mrs Justice Lang ruled that the mayor and Transport for London (TfL) acted unlawfully in their treatment of licensed taxis.

The judgement resulted from a judicial review mounted by the London taxi trade, concerning the specific Streetspace scheme on the A10 Bishopsgate Corridor in the City of London, which removed taxi access to a key arterial route.

The court ordered that the plan, guidance to boroughs and the A10 Bishopsgate Traffic Order be quashed but this decision has now been overturned on appeal, giving the newly re-elected mayor a major boost in his wider clean air and active travel agenda.

'Our world-leading Streetspace schemes help protect the health of Londoners, and this decision reinforces my determination to make it safer and easier for Londoners to walk and cycle and to help ensure a green and sustainable recovery from the pandemic,' he said.

'The judges' decision today, along with the vote from Londoners on 6 May, is a double mandate allowing us to continue with our bold measures. Our changes to Bishopsgate make it safer for people walking and cycling.

'This central London scheme is the centrepiece of the work we have done across the capital during my first term. Recent data from TfL demonstrates its success, with 700 bikes per hour on average passing through the area at peak times - more than 11 bikes per minute.

'Bishopsgate has long suffered with a poor safety record and low bus speeds and the temporary changes enable safer journeys by improving the flow of traffic and reducing the danger for vulnerable road users.

'I hope councils will work with me to ensure we have a green recovery across the city, delivering policies that address the air quality and climate crisis.'