Kier Highways has signed the contract to deliver the £150m A585 Windy Harbour to Skippool scheme for Highways England.

The project is being delivered through the six-year £8.7bn Regional Delivery Partnership (RDP) framework, to which Kier was appointed in November 2018.

The scheme will see the construction of a new three-mile dual carriageway bypass to alleviate the heavily congested A585 between Windy Harbour and Skippool.

The project aims to improve the safety of pedestrians, equestrians and cyclists around the existing A585, as well as reducing congestion and supporting the economic growth potential in Wyre and Fylde.

Joe Incutti, Kier acting group managing director for Highways, said: ‘This is an important project for our client Highways England, and I am delighted that we are working with them to successfully deliver this strategic scheme.

‘We are currently engaging with the local supply chain to utilise existing capability, in parallel with working to enhance skills across the region.’

Oxford Archaeology was carrying out advance archaeological excavations on site when it unearthed perfectly-preserved prehistoric vegetation and stone tools. 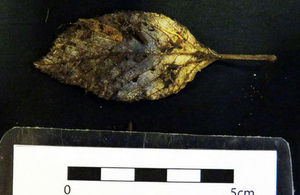 The artefacts found included a 6,000-year-old elm tree leaf (pictured), as well as tools including worked flint and chert blades which either belonged to Mesolithic hunter-gatherers (pre-3800 BC) or Neolithic first farmers (post-3800 BC).

The artefacts are to feature in two Highways England public information events being staged to update local residents and drivers on progress with the scheme.

Windy Harbour, at the eastern end of the planned bypass, is near the south bank of the River Wyre but is more than six miles from the sea. However, it was thought to be completely under water and then part of a coastal salt marsh thousands of years ago when it was fished by hunter gatherers and later settled by early Bronze Age farmers.

The works will commence in the spring and are due to be completed in summer 2023.