Kier Highways has been awarded a six-month extension on its Birmingham Interim Services Contract (ISC), which was originally a 15-month deal reported to be worth around £85m including a substantial amount of capital works.

Kier was appointed in April 2020 by Birmingham Highways Ltd (BHL) following the fallout from the previous PFI contract, which eventually saw Amey losing a bitter legal dispute with the council. 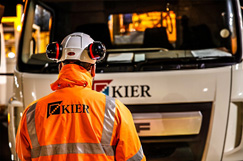 The new extension will run until 30 December 2021 and the work includes the city’s traffic operations, planned and reactive maintenance, inspections and winter services. Works will also include the continuation of street lighting replacement, surfacing works and capital investment.

Kier said work was 'already underway to procure surveys, extend sub-contracts, identify programmes of work and develop a plan for the delivery of services during the extended period'.

Joe Incutti, group managing director for highways, said: 'We are thrilled that we have been awarded this extension, and it is testament to the contract teams hard work and expertise in delivering highways services for local authority roads. We look forward to continuing to provide safe and reliable highway services to communities across Birmingham.'

Kevin Hicks, Birmingham City Council’s assistant director for highways and infrastructure, said: 'We have been pleased with Kier’s role in taking over for BHL since April last year, in difficult circumstances with COVID-19 and with a short mobilisation. They have been and continue to be an important part of improving Birmingham’s highway services for the future.'

Since the start of the contract, 288,533 m2 of carriageways and nearly 82,476 square metres of footways have been repaired.

This was in addition to ongoing management activities, which saw the team inspect 70,792km of roads, as well as installing 1,387 new LED street lights and responding to 15,489 customer enquiries.

BHL exercised its right to trigger the first extension option available under the contract and will consider further extension in the future.