Leeds City Council has awarded Balfour Beatty a contract to deliver the first two phases of the East Leeds Orbital Road (ELOR) after Carillion was lined up for the job.

The initial highway works are part of the largest road scheme in the city since the 1970s and come under the East Leeds Extension (ELE) programme, which includes development of land at Thorpe Park and Manston Lane Link Road.

The council said the award of the contract to Balfour Beatty ‘follows the robust contingency measures taken by Leeds City Council to deal with the risk of the original preferred supplier, Carillion, being unable to deliver the work’.

Cllr Richard Lewis, executive member for regeneration, transport and planning, said: ‘The investment in ELOR will make for better, more efficient journeys and the new and improved roads will move and manage traffic away from existing residential areas. Not only this, but updated pedestrian and cycleway infrastructure and carefully designed landscaping and drainage are planned. This will make things better for cyclists and walkers, with our carefully considered landscape plans making a difference to areas at risk of flooding.

The first two phases of ELOR include implementing improvements to a number of existing Outer Ring Road junctions, as well as developing the design for the main ELOR and are planned to start in the summer and last for approximately 15 months.

The main ELOR construction will then go ahead from late 2019, subject to statutory approvals and land acquisition.

As a major strategic growth area for the city, ELE will see undeveloped land earmarked for the development of around 5,000 new homes, community facilities, new schools and local retail outlets.

The picture below shows the ELE in orange, bordered by the ELOR in red. 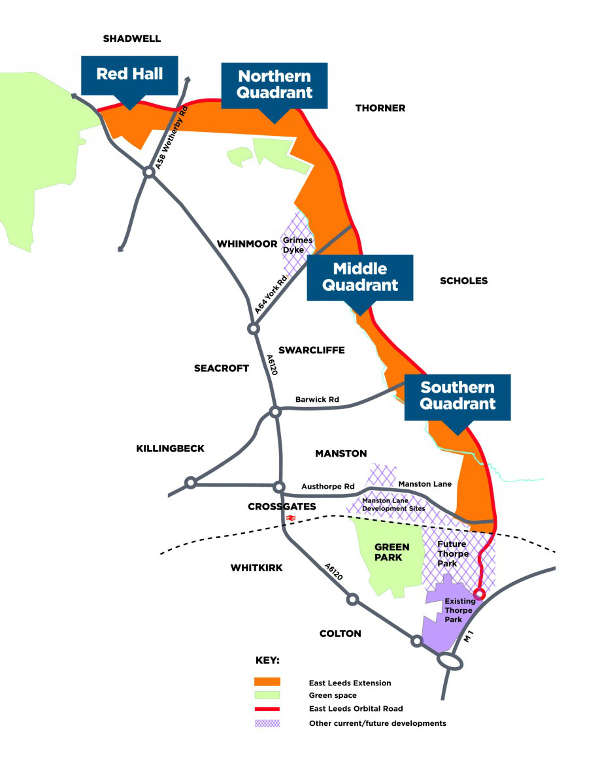