The Regent Street Flyover carrying the A64 through Leeds city centre has fully re-opened after a two-year project costing £31m.

Construction of the new flyover began in May 2020, after the two existing structures reached the end of their usable life and were demolished and rebuilt, with over 120 metres of new bridge installed.

Leeds City Council described the project as a major engineering achievement, delivered despite the challenges of working through the COVID pandemic.

The council said the works are part of the Connecting Leeds transport strategy, ‘which sees an unprecedented number of schemes set to transform the way we travel’.

It said replacing the flyover and complementary works to the Armley Gyratory will ensure that the Inner Ring Road will maintain traffic flow and enable the pedestrianisation of City Square.

The council added that moving vehicles around the outer edge of the city and closing Neville Street to through traffic would enable it to transform the city centre ‘for a more liveable, greener, and better-connected city’. 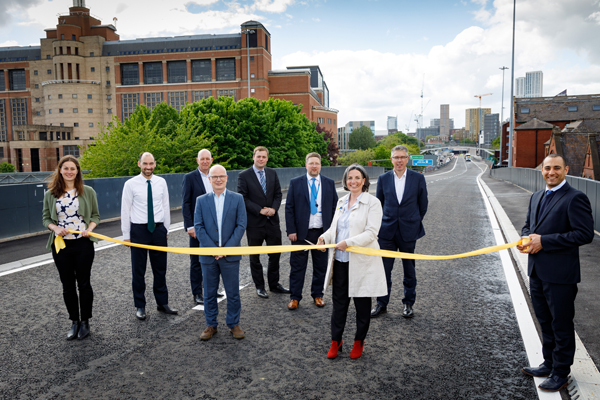 Helen Hayden, executive member for infrastructure and climate (pictured cutting the tape), said: ‘I’m pleased to see this scheme completed on schedule, after two years of very challenging work through the pandemic.’

Balfour Beatty carried out the construction works, with the bridge designed by WSP.

Balfour Beatty area director Stephen Semple said: ‘We’re delighted to mark the full reopening of the A64 to traffic through the completion of the Regent Street Flyover, concluding two years of hard work and dedication.

The New York Road tunnel off-slip will remain closed while further work is carried out in the tunnel.