Highways England is significantly off track against its key 2015-2020 road safety target, according to data obtained by Highways.

The government-owned company has a key performance indicator to reduce the number of people killed and seriously injured (KSIs) on the strategic road network (SRN) by 40% by 2020, against a baseline of the 2005-09 average.

Based on changes to the reporting of serious injuries the adjusted baseline is 3,094 KSIs, meaning that the adjusted 2020 target is 1,857.

When Highways England inherited responsibility for the strategic road network in 2015, adjusted KSIs had already fallen to 2,301, a drop of 26% on the baseline and two thirds of the drop to reach its target already achieved.

However, in 2018 KSIs actually increased, meaning that the cut against the baseline is still only around 30%. 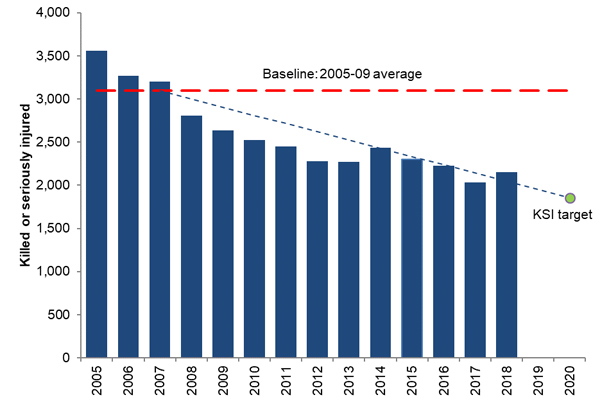 Source: Office of Rail and Road

Adjusted data obtained from regulator the Office of Rail and Road (ORR) by Highways shows that there were 2,301 KSIs on the SRN in 2015.

The recently published Road Investment Strategy for 2020-25 (RIS 2) includes a graph (below) which shows a rise in the number of KSIs on the SRN. The DfT has confirmed that the figure used here for 2018 is 2,152, the number used by the ORR. 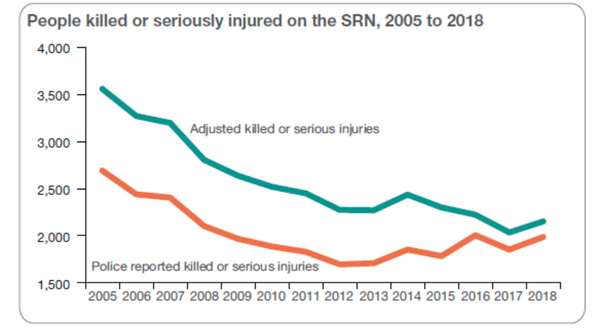 The importance of the target

Amidst criticism of its approach to improving road safety, Highways England's head of road safety, Richard Leonard, has always stressed that meeting the KSI reduction target is its main focus.

However, in a document last year, the ORR warned: 'The increase in the number of people killed or seriously injured on the strategic road network in 2018 puts the company’s delivery of its safety target at risk.'

The RIS 2 document argues that while there has been a long-term downward trend in KSIs on the SRN, 'opportunities to maintain this rate of progress get harder and as a result the rate of decline has slowed’.

Highways England also has a ‘Zero Harm’ goal of bringing the number of KSIs on the SRN ‘as close as possible to zero by 2040’. The RIS 2 document appears to water this down to ‘a level approaching zero by 2040’, although neither definition produces a tangible numerical target against which success can be measured.

The RIS 2 document states: ‘…the trajectory set for the next five years means Highways England remains on course for zero people killed or seriously injured by 2040. The target is therefore based on a 50% reduction against a 2005-09 average baseline, keeping Highways England broadly on the same trajectory as RIS1.’

Highways England to raise the speed limit through roadworks

Eurovia smooths the path to success

'Build back better' e-conference to be held in September

£39.774 - £42.684
The successful candidate needs to have the professionalism, skills and abilities to... Greenwich, London (Greater)
Recruiter: Royal Borough of Greenwich

£38,541 – £46,599
To help us deliver our responsibilities we are seeking suitably qualified and experienced applicants to fill a number of senior grade posts Scotland
Recruiter: Transport Scotland

£38,541 – £46,599 (pro rata for part time)
You will have responsibility for developing and delivering on the Initiatives set out in the CAV Roadmap for Scotland Scotland
Recruiter: Transport Scotland

£36,876 - £38,813
The ideal candidate will be a highly motivated individual, who is prepared to work flexibly and as part of a team, in... Kirklees, West Yorkshire
Recruiter: Kirklees Metropolitan Council

£19,554 - £21,166
Are you a hard-working individual, who enjoys working outdoors in all weather conditions? Kirklees, West Yorkshire
Recruiter: Kirklees Metropolitan Council

£22,021 to £26,999
We are looking for an Assistant Engineer to join our Traffic Engineering team. Northallerton, North Yorkshire
Recruiter: North Yorkshire County Council

Negotiable
OverviewThis is your chance to make a lasting impact on our county. From developing the connected transport networks of the future and driving sustain England, Buckinghamshire, Aylesbury
Recruiter: Buckinghamshire Council

£35,500 to £40,710 per annum
We are looking to appoint a Senior Countryside and Ecology Officer. York, North Yorkshire
Recruiter: City of York Council

£38,876 and £40,760
We are looking for Engineers with extensive experience in highway design. Morpeth, Northumberland
Recruiter: Northumberland County Council
Tweets from https://twitter.com/highwaysmag/lists/industry-tweets