Live Labs 2 'will depend on first wave success'

Approval for a second tranche of the ADEPT Live Labs programme is likely to depend on whether ministers can see any potential for the techniques developed under current pilots.

As Highways has reported, the Department for Transport (DfT) is considering plans for a sequel to the local government directors body’s Live Labs project, which could focus on ‘zero carbon highways’. 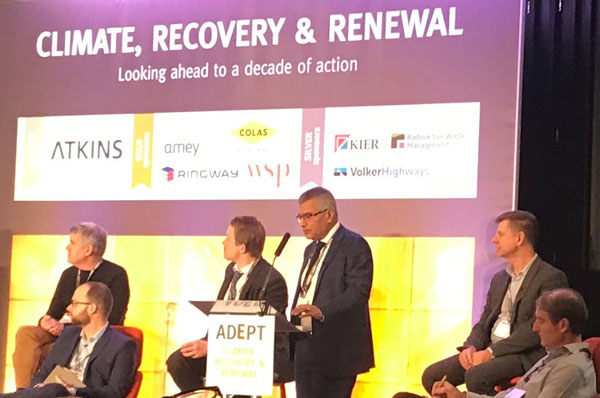 Matt Eglinton to the right of the podium speaker, Yogesh Patel of Eurovia UK

Speaking at a session on the current Live Labs pilots at the ADEPT Autumn conference, Matt Eglinton, head of local roads and winter resilience at the DfT, asked: ‘Are local authorities thinking about using some of the learning from this?’

Referring to the West Midlands Network Resilience Live Lab, where police ANPR data is shared with Transport for the West Midlands, as well as projects from Buckinghamshire and Suffolk councils, he said: ‘Could this be rolled out to other places?’

He continued: ‘I think that is where ministers will be very interested in understanding whether the learning can be rolled out, scaled up and expanded across the country – is this useful? And I think that will certainly help in terms of if we can get a second Live Labs.’

Although the two-year, £22.9million DfT-funded Live Labs programme grew out of a need to accelerate innovation across the local roads sector, its fifth white paper, published this week, covers Buckinghamshire and Suffolk’s exploration of the potential of SMART technology to support adult social care.

The Buckinghamshire Live Lab has focused on creating a Living Lab in the Fairford Leys area of Aylesbury Garden Town.

As part of this, the council has created a MESH network around the town with interconnected sensors and nodes built into street lighting. The adult social care trial, due to take place in January 2022, will see sensors installed in the homes of 12 volunteers - who will also have wearable devices - all connected to an app.

The app will be able to send alerts to the wearer - for icy weather, for example - but also to carers, alerting them to incidents such as falls, someone leaving home unexpectedly or appearing to be lost.

The trial will also test how the technology might enable people to stay in their homes for longer with greater autonomy and independence, and thereby reducing pressure on the social care system.

Suffolk is also using sensors, exploring how a long range wide-area network (LoRaWAN) and geofencing (virtual perimeter) technology might enable a similar level of independence. The technology can monitor daily routines to check people are active and behaving normally, but also check for household problems such as water leaks or unsafe carbon monoxide levels.