Influential MPs have called on government to consider a ban on using 'hands free' phones while driving to prevent ‘entirely avoidable’ road deaths.

The Transport Committee said the evidence is clear that using a mobile phone while driving is dangerous, and called for an overhaul of current laws to cover use, irrespective of whether this involves sending or receiving data, tougher restrictions on driving while us and stricter enforcement. 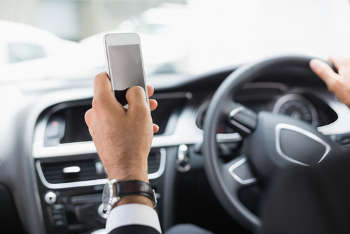 They recommended that ministers explore options for extending the ban on hand-held devices to hands-free phones ‘as evidence shows that using a hands-free device creates the same risks of crashing’.

Committee chair Lilian Greenwood MP said: ‘Despite the real risk of catastrophic consequences for themselves, their passengers and other road users, far too many drivers continue to break the law by using hand-held mobile phones.

‘If mobile phone use while driving is to become as socially unacceptable as drink driving much more effort needs to go into educating drivers about the risks and consequences of using a phone behind the wheel.

‘There is also a misleading impression that hands-free use is safe. The reality is that any use of a phone distracts from a driver’s ability to pay full attention and the Government should consider extending the ban to reflect this.’

MPs said that while the number of related casualties has risen steadily, the rate of enforcement has plunged by more than two thirds since 2011, adding that while the penalties for using a hand-held mobile phone while driving were increased in 2017 they ‘still do not appear to be commensurate with the risk created’.

Shaun Helman, chief scientist for research experts TRL said that while a debate about hands-free and hand-held phone use is welcome, ‘if we want to improve road safety and stop killing people it completely misses the point’.

He explained that as well the potential for cognitive distraction, ‘the phrase hand-held misleads us by making us think that it is the holding a device that is the worst thing to be doing with the hands while driving. It isn’t; there are many other ways in which a driver can manipulate a device and which are much more likely to cause a crash – texting, browsing social media, scrolling through app functions and so-on’.

The Department for Transport said it would respond to the report’s recommendations ‘in due course’.

A spokesperson said: ‘While mobile phones are a vital part of modern life and business, drivers must always use them safely and responsibly.

‘Being distracted by a mobile phone while driving is dangerous and puts people’s lives at risk. The law is clear that anyone driving dangerously is committing a criminal offence.’