The Queensferry Crossing is closed following reports of ice falling on vehicles despite a ministerial assurance just three months ago that such incidents are ‘very rare’ and that monitoring equipment would be fitted.

It has been reported that a number of vehicles were damaged by falling ice on Monday, leading to its closure. 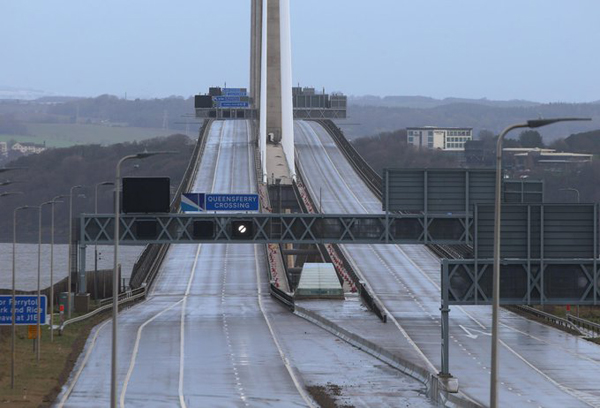 Transport Scotland said the £1.3bn road bridge, which opened in 2017, will remain shut until at least Wednesday (February 12). On Wednesday morning it was still closed.

Michael Matheson, cabinet secretary for transport, infrastructure and connectivity visited the site ‘to be given an update on the efforts to reopen the bridge’ and spoke with engineers at the site and officials at the Traffic Scotland National Control Centre in South Queensferry.

In October, in response to a written parliamentary question regarding an earlier incident, Mr Matheson stated: ‘The conditions that can lead to a build-up of ice of this kind are very rare in the Forth estuary.’

He added that ‘processes have been developed to ensure that any ice formation is monitored and managed to minimise the impact on traffic over the structure’.

He wrote: ‘Sensors which detect ice accumulation will be fitted to the bridge and incorporated in the structural health monitoring system.’

Transport Scotland said it would make a statement on Tuesday afternoon on the issue of monitoring equipment but had not done so at the time of publication. However, it appears that it has not yet been installed.

On Tuesday, Mr Matheson said: ‘Looking ahead we will implement constant monitoring of the Queensferry Crossing, when similar weather conditions are expected. With a particular focus on the areas we now know as vulnerable to this ice accumulation.’

If this closure is due to sheets of ice falling in to the carriageway, it’s exactly what I asked ?@scotgov? about last year. Accident waiting to happen. https://t.co/Pdnl0dYPXn

Despite asserting in October that a build-up of ice in March 2019 was ‘a result of a very specific set of weather conditions', Mr Matheson sought to portray the recurrence of the problem as ‘unique’.

He said: ‘Engineers have been closely monitoring and studying the unique weather conditions causing this issue with a build-up of snow and ice on the Queensferry Crossing.

‘We are developing our understanding of these conditions, which involve a certain consistency of snow and/or sleet, wind speed and direction, interacting fluctuating low temperatures. This is leading to an ice formation on the bridge’s towers and cables at low temperature, which has subsequently fallen from the bridge when thawed.’

Interesting set of exchanges last year regarding Queensferry Crossing closure due to falling ice, the monitoring systems post-dating the bridge's opening and a working group established to look at the problem. Old bridge affected once in 55 years. QC shut 2nd time in a year. https://t.co/T2tKdajRSy

Ironically, Mr Matheson pointed out that the Forth Road Bridge (FRB), for which the Queensferry Crossing was a replacement, remains open as a public transport corridor between Edinburgh and Fife.

He said: ‘We continue to work closely with public transport providers to provide alternative transport and additional capacity. Working in partnership we have strengthened the public transport offering across the Forth between the Lothians and Fife. Additional buses are in operation, including additional bus services from rail stations, which are experiencing higher than normal demand.

‘The decision has been taken to not reopen the FRB to general traffic given it is currently undergoing significant renovation work on the main expansion joints and has a contraflow in operation. ‘Opening the FRB up to general traffic is likely to result in increased congestion for all vehicles and leave the crossing vulnerable to lengthy delays as a result of any accidents or breakdowns. This would have a significant negative impact on journey times for public transport over the Forth.’