National Highways has been accused of backtacking on key commitments from ministers regarding the distance between emergency refuge areas on smart motorways.

Out of six smart motorway schemes under construction, reports suggest four will open as originally designed with emergency areas (EAs) up to 1.5 miles apart, rather than the new standard of around a mile or 0.75 miles where possible.

While this is technically not against policy because these schemes were designed before the cut off on the Department for Transport's (DfT) commitment, Highways can now reveal that the national roads operator also appears to be backtracking on the standard itself.

Although National Highways has said it ‘is taking forward' the DfT commitment, it appears to have a different interpretation of the standard from that put forward by ministers.

Last month the DfT stated that it ‘agrees in principle' with a recommendation from the Transport Select Committee that: ‘The Department and National Highways should retrofit emergency refuge areas to existing all-lane running motorways to make them a maximum of 1,500 metres apart, decreasing to every 1,000 metres (0.75 miles) where physically possible.’

It stated explicitly: ‘The Stocktake and Action Plan launched a new standard to achieve closer spacing of EAs at 0.75 mile where feasible, up to a maximum of 1 mile. This is now a design requirement for new ALR smart motorways schemes which entered the design phase from November 2020.’

However, a National Highways spokesperson told Highways that the standard ‘refers to places to stop in an emergency [which] could be an EA, slip road [or] service station’.

This means that even while purporting to abide by the standard, National Highways would leave EAs significantly further apart than promised by ministers, relying instead on other places to stop that it considers safe. 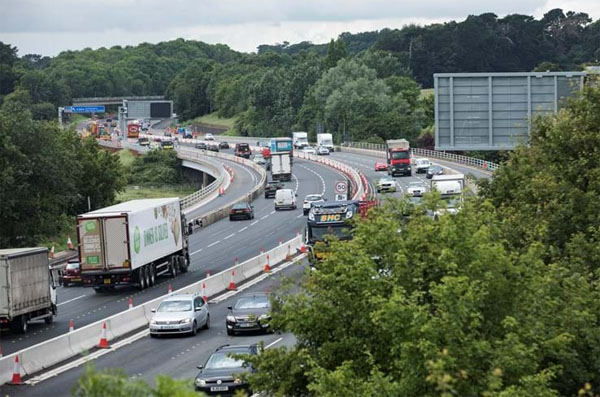 The disparity has arisen as the government-owned company removes traffic management barriers on a 15-mile stretch of the M27 between junctions 4 and 11 in Hampshire that has been newly converted to all lane running (ALR), admitting that it does not comply with the new standard.

Four lanes will be open in each direction but a 60mph limit will remain while new technology, including radar-based stopped vehicle detection, is undergoing final tests.

However, the new stretch of motorway has just 13 emergency areas (EAs). National Highways has said that this represents ‘a place to stop in an emergency every 1.27 miles on average’. This is in breach of even National Highways’ interpretation of the standard.

It has not stated what the average distance is between EAs. However Highways has calculated that over 30 miles of carriageway, this is approximately one EA roughly every two miles, double the new maximum.

National Highways explained that the scheme was designed before the new standard for distances ‘between places to stop in an emergency’ was introduced.

The government-owned company said it was unable to confirm whether the scheme would benefit from a government commitment last month to spend £390m on a retrofit programme that will add 150 additional EAs by 2025 to ALRs in operation and construction.

'It looks like ministers are cutting corners with road safety and risking more avoidable tragedies.

'The Government should stop taking people for fools, think again, and guarantee safety work is completed before the new smart motorways are opened.'