Hammersmith and Fulham Council has approved a new plan to stabilise Hammersmith Bridge at a fifth of the previous cost, with works expected to be complete in less than a year.

The council said its specialist engineers, Mott MacDonald, devised the alternative stabilisation plan, which has now been chosen to replace the Pell Frischmann scheme.

It commissioned Dr Steve Denton of consultants WSP to compare the two options to stabilise the bridge’s cast iron pedestals. He concluded that the £6m plan proposed by Mott MacDonald ‘would be technically superior, implemented more rapidly and more cost efficient than the £30m scheme presented by Pell Frischmann’.

The proposal was presented to engineers and officials from the Department for Transport (DfT) and Transport for London (TfL) at a meeting with Dr Denton and council engineers earlier this month.

The council said the new plan, which will reduce the works programme to 46 weeks and has been favourably reviewed by Historic England, is expected to reduce the need for temporary closures. Engineers believe it will also avoid the need to divert the gas mains on the bridge for the stabilisation work.

Although the bridge was re-opened to pedestrians, cyclists and river traffic last month, safety experts have stated that the use of the temperature control system, which enabled the re-opening, can only be temporary. 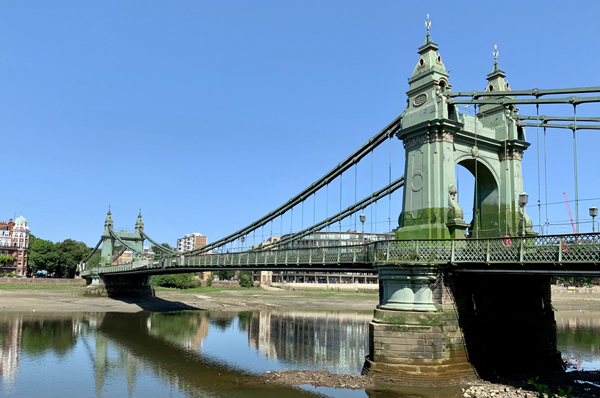 The bridge on the day it re-opened to pedestrians, cyclists and river traffic

Council leader Stephen Cowan has agreed and signed an Urgency Report to begin the full stabilisation works. He said: ‘We don’t want to lose a single day in delivering the full stabilisation of the bridge to ensure residents on both sides of the river no longer have to deal with closures or the threat of closures.

‘Whilst putting the safety of the public first, we believe that the importance of maintaining pace and progress, the real savings achieved by the deployment of the preferred stabilisation works option and the current vulnerability of Hammersmith Bridge demands rapid action.’

Cllr Cowan said that to expedite the works at speed, the council will fund the £6m package in anticipation that the DfT and TfL will reimburse it with their one-third shares as outlined in the Government’s TfL funding announcement in June. The council is developing a Memorandum of Understanding with the DfT and TfL incorporating proposals to share costs of the work.

Dr Denton’s report states: ‘The design concept for the Pell Frischmann proposal is to construct an external frame that provides an independent load path, eliminating reliance on the pedestals until they are strengthened and new bearings are installed.

'Given the uncertainties about the pedestals at the time the concept was first developed, it is entirely understandable why such an approach was initially taken.’

The Mott MacDonald solution involves the use of elastomeric bearings which allow any pressure to be applied equally to all four corners whilst protecting the vulnerable 134 year-old cast iron structure.

Dr Denton said the Mott MacDonald proposal benefits significantly from the insight gained from the refined pedestal analysis engineers have done over the last year.

He said: ‘As a result, jacking to enable bearing replacement is undertaken using the pedestal itself, with the robustness of the pedestal having been enhanced prior to jacking.’

Whereas the Pell Frischmann plan suggested the driving of piles through historic fabric, Dr Denton said that ‘the Mott MacDonald proposal has lower impact on historic features’.

The pedestrian stabilisation plan is the first phase of works on the bridge. The second phase will involve extensive strengthening and full restoration and will allow the bridge to re-open to motorised vehicles.

Dr Denton is now considering the two current options for the strengthening and restoration work – the existing TfL plan and the Fosters + Partners/COWI proposal for a temporary double decker truss.