New bridge looks to the future and preserves the past

Construction of the £46m new Dyfi Bridge on the A487 north of Machynlleth is set to begin in March.

The new structure will be a viaduct across the floodplain and a river bridge across the Afon Dyfi approximately 480 metres upstream of the existing bridge.

Officials said the current 19th-century bridge is frequently closed due to flooding, which affects the community’s ability to access key services and is likely to increase with the impact of climate change. 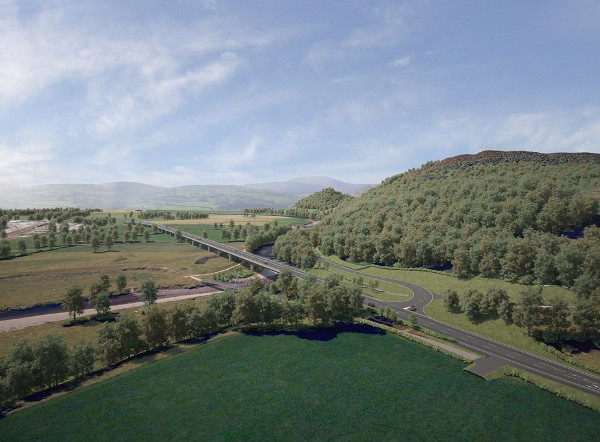 Removing large scale traffic from the 19th century bridge and provision of a walking and cycle path is designed to improve active travel opportunities increasing the attraction of Machynlleth and surrounding area as a tourist destination.

The scheme will include traffic calming and improved drainage on the A493 immediately north of the bridge to protect the existing cottages, and there will be a flood bund constructed to protect the Dyfi Eco Park from river flooding.

Transport minister Ken Skates said: ‘As well as being a key route between north and south Wales, the A487 is an important link between communities locally. All too often these communities can find themselves isolated because of flooding at Dyfi Bridge and this must be addressed.

‘The new bridge will also make public transport more reliable, allowing people to access important services in Machynlleth and further afield. The existing listed 19th century stone bridge will continue to be an important asset for the area as an active travel route in the beautiful Dyfi valley benefiting locals and visitors alike.’

The works will be carried out by contractor Alun Griffiths, which plans to appoint a graduate engineer and two local apprentices to work on the scheme.

‘Before works commence, we will be undertaking significant community engagement, explaining our plans and detailing how we will be minimising disruption to the local community,' he said.

'We’re also looking forward to embedding the seven Well-being Goals of the Future Generations Act into our operations – ensuring local people, now and in the future, benefit from the project.’

The Welsh Government gave the go-ahead for new bridge in January 2020. It is due to be completed by spring 2023.