The RAC attended significantly fewer breakdowns for pothole-related faults in 2019 than the previous year, despite a surge in the last quarter.

The motoring organisation released the analysis of breakdown data to coincide with National Pothole Day on Wednesday (15 January). 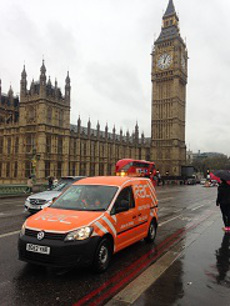 It said its patrols attended just short of 9,200 breakdowns for problems such as distorted wheels, broken suspensions springs and damaged shock absorbers last year, down from 13,000 in 2018.

The RAC pointed out that 2018 saw a dramatic increase in potholes following the ‘Beast from the East’ severe weather and that the 2019 figure still represented 1.1% of all breakdowns it attended during the year.

It added that it attended more than 2,000 breakdowns that are likely to be attributed to potholes in the final three months of 2019, which was 300 more than during the same period in 2018.

Head of roads policy Nicholas Lyes said: 'Our figures clearly show the problem of potholes has not gone away. Our patrols are still attending on average around one pothole-related breakdown every hour of the day.

'We anticipate the Government will pledge further funds to help cash-strapped councils mend potholes in the March Budget, but such pledges are only chipping away at the problem, and they’re unfortunately not addressing the root cause of why so much of the UK is still characterised by crumbling road surfaces.'

The RAC said its Pothole Index suggests the widespread problem of potholes and poor-quality roads remains as the Index currently stands at 1.7, down from 1.8 in the third quarter of 2019.

This means drivers are 1.7 times more likely to break down as a result of pothole-related damage than they were in 2006 when the RAC first started collecting data.

The motoring organisation describes the index as ‘an accurate long-term indicator of the health of the UK’s roads’.

It added that despite the relatively mild winter in the UK so far, it is concerned that the arrival of colder conditions in the next few months will likely trigger a widespread outbreak of more potholes, 'causing expensive damage to thousands of drivers’ vehicles and creating new road safety hazards'.

Cllr David Renard, the Local Government Association’s transport spokesman, said: Councils are on the side of all road users, fixing a pothole every 17 seconds, and want to work with government to tackle our national road repairs backlog, which will take more than £9bn and a decade to complete.

‘Providing councils with funding in the forthcoming Budget would mean they can invest in road maintenance and other infrastructure projects.’

The A14 story part 4: The strength beneath the structure

£41,881 - £46,845 per annum
We are looking for a committed and driven individual to join the team.  You will manage an area team with... Sandwell, West Midlands
Recruiter: Sandwell Metropolitan Borough Council

£32.430 - £34.794
We are seeking to recruit an engineer to join our busy and dedicated design team. Greenwich, London (Greater)
Recruiter: Royal Borough of Greenwich

£30,451 to £34,728 per annum
Somerset is a great place to live, work and play, with a spectacular countryside and coastline Somerset
Recruiter: Somerset County Council

£48,545 - £52,090
Coventry is a great place to live and work and it’s getting even better - and having the right infrastructure is vital. Coventry, West Midlands
Recruiter: Coventry City Council

£31,434 - £34,986 per annum
We would like you to have some experience in working in Environmental Health so that you can show an understanding of... Kensington and Chelsea, London (Greater)
Recruiter: The Royal Borough of Kensington & Chelsea Council

£47,853 - £53,792 per annum (including market factor)
Are you looking for a challenge and diverse range of work in your next career move? Telford, Shropshire
Recruiter: Telford & Wrekin Council

£39.880 to £41.881 per annum
The successful candidate will be responsible for managing, leading and developing the team to ensure the delivery, and success of... St Helens, Merseyside
Recruiter: St. Helens Metropolitan Borough Council

£22,183 - £32,234
We are looking for someone with understanding of Highway and Transportation engineering project delivery and maintenance activities. Cambridgeshire
Recruiter: Cambridgeshire County Council

£24,982 - £29,577 per annum
This position is a fixed term contract for 12 months with the prospect of a permanent role once the Class C Driving Licence has... Sandwell, West Midlands
Recruiter: Sandwell Metropolitan Borough Council
Tweets from https://twitter.com/highwaysmag/lists/industry-tweets