RoSPA warns of 'another lost decade' on road safety

New statistics have confirmed that the number of deaths on British roads continued to flatline at the end of the last decade, although the number of other casualties fell.

The Department for Transport (DfT) has published Reported road casualties in Great Britain: 2019 annual report, which reveals that there were 1,752 reported road deaths during that year. 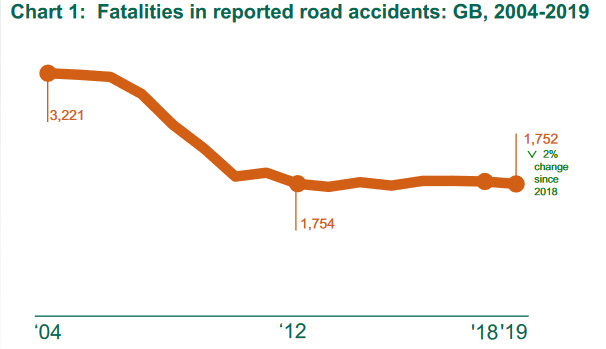 Officials pointed out that this is similar to the level seen since 2012, following a period of substantial reduction in fatalities from 2006 to 2010.

They added that although the number of fatalities was 2% less than in 2018 (1,784), ‘this small decrease may be due to natural variation’.

Michelle Harrington, road safety manager at the Royal Society for the Prevention of Accidents (RoSPA), said: ‘We are deeply concerned about the lack of progress made towards reducing the number of road accidents and deaths since 2010. We cannot afford for the 2020s to be another lost decade.

'We hope that the recent UK Government traffic policing consultation will provide an opportunity for a refocus on making our roads safer for all.’

Car occupants accounted for 42% of road deaths, with pedestrians next at 27%, followed by motorcyclists (19%) and pedal cyclists (6%).

Officials advised that comparison of injury figures with earlier years should be made with caution due to changes in reporting by some police forces, which are likely to have made the recording of injury severity more accurate for forces using them.

A recently developed statistical methodology estimates that there would have been 30,144 serious injuries in 2019, if all police forces were using injury-based severity reporting systems.