Inflation and supply chain pressures have hit the roads sector with 20% cost increases since last year, senior Department for Transport (DfT) officials have been warned.

Pressures on UK supply chains have reportedly resulted in more imports from overseas adding to the sector's cost, time and carbon footprint.

Feedback from the supply chain also suggests the problems had been made worse by a lack of certainty on medium-term funding, which was described as ' a barrier to unlocking investment in skilled labour during such difficult times'. 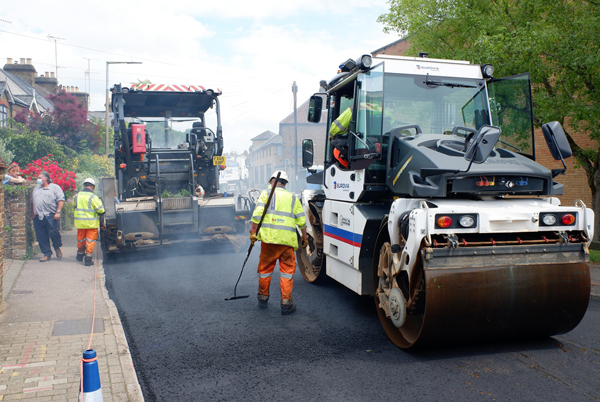 Resurfacing being carried out by Eurovia UK, Rickmansworth, Hertfordshire, June 2021

A meeting of the UK Roads Liaison Group (UKRLG), which brings together national and local government from across the UK, was briefed this month on inflationary pressures and supply-chain delays that are affecting the industry.

It was attended by Stephen Fidler, co-director for local transport at the DfT, as well as other senior DfT officials, who sat in on specific sections of the meeting.

The report suggested that 'average material costs increased in excess of 20% compared to [the] same period last year'.

Delays to the actual supply of materials were also a concern in a supply chain 'that has previously worked on [a] just-in time model' resulting in 'substantially increasing non-productive time and subsequently increases prices'.

The UKRLG also heard that the availability of surface water plastic products is stable for small quantities but subject to increased lead-in times beyond four weeks for larger orders.

Following the Spending Review in October, Government pledged a three-year funding settlement for local authorities, albeit on a somewhat reduced budget.

The report to the UKRLG identified lack of medium term funding as 'proving a problem for the survival of Tier 2 and Tier 3 contractors'.

It stated: 'Early release of funding will provide the supply chain with the medium-term confidence that they are seeking and enable;