Transport for London (TfL) has sought to distance itself from its own modelling of the impact of the Silvertown tunnel, which contradicts claims that both TfL and City Hall have made that the scheme will not increase traffic and carbon.

Critics of London mayor Sadiq Khan’s support for the new tunnel under the Thames have long questioned whether it is consistent with his pledges to cut carbon and other emissions.

In response, both TfL and City Hall have asserted that the scheme will not generate new traffic in the way that other new roads almost invariably do. 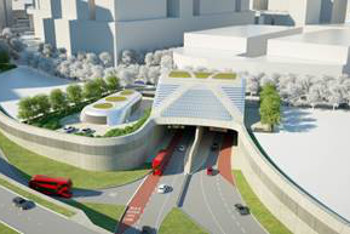 A paper to TfL’s Programmes and Investment Committee last October 2021 stated: ‘The Scheme is not forecast to lead to an increase in traffic and associated carbon emissions and is expected to provide an overall improvement in air quality.’

In February, London's deputy mayor for transport, Seb Dance, said: ‘The Silvertown tunnel can help reduce congestion and poor air quality around the Blackwall Tunnel area without increasing the volume of traffic crossing the river.’

However, modelling for TfL’s application for a development consent order (DCO) did indeed forecast that the scheme would increase traffic and associated carbon emissions.

The Energy and Carbon Statement forecast an annual decrease of 3,000 tonnes of CO2 with the scheme in 2021 but an annual increase of 23,000 tonnes for what was then the ‘design year’, 2036. This additional carbon ‘would be generated by the Scheme based on the traffic using the tunnel’.

TfL has not disputed that its current forecasts state that the tunnel will increase carbon emissions from traffic but has suggested that future modelling will produce a less negative impact.

It has said that factors such as the introduction of zero emission buses and the extension of the ultra low emission zone will ‘reduce’ the carbon impact from the scheme. However, it has also rowed back on pledges of a high level of bus provision through the tunnel.

TfL has also pointed to policies, such as a planned user charge for both the new tunnel and the existing Blackwall Tunnel, that it says will ‘manage’ traffic and stressed that it ‘will act to reduce’ the scheme’s impacts if future modelling suggests that they will be worse than its forecasts.

However, this would still allow traffic levels to rise in line with its forecasts and TfL has not guaranteed that it will set the user charge at a level that will prevent them from increasing.

A TfL spokesperson said: ‘Transport for London has comprehensively demonstrated throughout the DCO process that the combination of the new tunnels, user charging, and cross-river bus services will allow us to effectively manage traffic levels to ensure the scheme delivers the right outcomes for Londoners – eliminating congestion, better and more reliable journeys and new cross-river public transport opportunities.

‘We have always been clear, throughout the previous six-month public enquiry and in recent years, that we are committed to providing a cross-river bus network as well as managing traffic levels through the introduction of a user charge. The necessary modelling and assessments for future bus provision, updated traffic models, and environment modelling are all underway and will ensure that the final scheme reflects both current and future predicted levels to deliver the right outcomes and meet the legal requirements within the DCO.’

City Hall has not responded to a request for comment, other than to state that its previous comments on the issue have been based on data from TfL.