Skanska is working to increase the use of a hydrogen cell technology that can cut fuel consumption and emissions, after trialling it on a highways scheme.

The Ultimate Cell is a hydrogen device developed by UTIS that increases the efficiency of vehicles and machinery, reducing fuel consumption and emissions, and maximising the benefits of hydrotreated vegetable oil (HVO) fuel.

Skanska UK mandated HVO for use across all site plant and equipment last year.

Described as ‘not much bigger than a can of baked beans’ and powered by the battery or alternator on vehicles and machinery, the cell uses an electrolyte to produce a gaseous mixture of hydrogen and oxygen. The hydrogen is fed into the combustion chamber of the machinery or vehicle, making the fuel burn more efficiently. 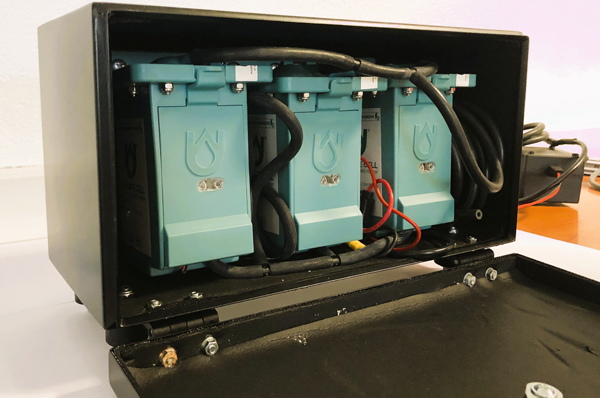 Skanska carried out the initial trial on the M42 Junction 6 scheme in February, with three cells installed into an HVO-powered generator. It said the trial’s initial success led to further tests, this time under controlled conditions.

The process involved testing three, then six cells installed in a generator powered by HVO fuel.

The results of the trial showed a fuel usage saving of between five and 15% when the generator was in use, and up to 40% when idle. A trial of a single cell in GBF’s new Land Rover Discovery was also carried out and this achieved similar savings.

Multiple cells and much larger single units are available for larger engines used to power heavy plant, or trains and ships.

Skanska said its senior procurement manager, Chris Douglas, discovered the cell via LinkedIn and then reached out to the supplier.

He said: ‘Having the opportunity to take this initial discovery and bring it to life with the backing of Skanska is very exciting. So much can be achieved when we work together and support our supply chain. Ultimate Cell is a small business and it’s brilliant that we are able to support their development and help shape a sustainable future for all.’

Highways operations director Glennan Blackmore added: ‘Skanska will be one of the first companies in the UK to adopt this technology, thanks to the hard work put in by Chris and everyone involved.

‘This technology has the potential to generate big savings in carbon and cost, not just for Skanska but also for other companies and industries in the UK. I am very much looking forward to seeing how this progresses.’