A coroner has described all lane running smart motorway schemes as presenting ‘an ongoing risk of future deaths’ and called for a new review into their safety.

The comments were made at the inquest into the death of Jason Mercer and Alexandru Murgeanu, who were killed on an all lane running stretch of the M1 near Sheffield in June 2019.

The two men were involved in a minor collision and had stopped to exchange details when a lorry hit their stationary vehicles on what had previously been the hard shoulder. 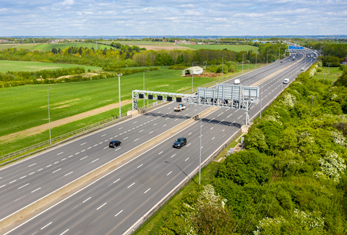 Coroner David Urpeth concluded that the two men had been unlawfully killed, and said that the operation of the smart motorway system had been a contributing factor.

He said he would be writing to Highways England and transport secretary Grant Shapps to ask for a review.

According to the Guardian, Mr Urpeth said: 'I find, as a finding of fact, it is clear a lack of hard shoulder contributed to this tragedy. I believe that smart motorways, as things currently stand, present an ongoing risk of future deaths.’

Mr Mercer’s widow, Claire Mercer said: ‘After more than a year and a half campaigning I today feel that somebody has listened and finally taken steps to address the use of these death trap roads.

‘Ever since Jason died I have been determined to bring about change to ensure more families don’t go through the heartbreak of losing a loved one by the completely nonsensical removal of hard shoulders on busy motorways.

‘I am grateful to the coroner for finally calling for a wider review of the use of smart motorways and for his conclusion that the way they operate was a contributory factor in Jason’s death.’

Llorry driver Prezemyslaw Zbigniew Szuba was jailed for causing death by driving without due care and attention but Mrs Mercer has said it was wrong to prosecute him.

‘I saw him at court the day he was sentenced and I told him he wasn’t to blame,’ she said.

A Highways England spokesperson said: 'We extend our deepest sympathies to the families of Alexandru Murgeanu and Jason Mercer. We recognise this continues to be an incredibly difficult time for them.

'Every road death is a tragic loss of life. We are determined to do all we can to make our roads as safe as possible and are already addressing many of the points raised today by the coroner as published in the Government’s Smart Motorway Evidence Stocktake and Action Plan of March 2020. We will carefully consider any further comments raised by the coroner once we receive the report.'

The company’s own data has shown that on average it can 17 minutes second for a stationary vehicle in a live lane to be spotted.

The RAC’s head of roads policy. Nicholas Lyes, said: ‘Since Highways England’s major review of the design and operation of smart motorways some good progress has been made by adding more SOS areas to the M25 and developing a new standard for future schemes.

‘The introduction of stopped vehicle detection technology is a vital element of this and is due to be retrofitted to existing smart motorways as well as schemes currently under construction. Sadly, there appears to have been precious little progress with retrofitting to date considering this was announced last March.’

However, Highways has learned that Highways England began work this month to retrofit a radar-based stopped vehicle detection (SVD) system on 21 smart motorway schemes and has carried out a large-scale trial of a CCTV-based alternative.