Drivers in the UK lost an average of 178 hours a year due to congestion in 2018, costing £7.9bn, according to the latest data from INRIX.

The mobility analytics and connected car services firm has published its annual Global Traffic Scorecard which identified and ranked congestion and mobility trends in more than 200 cities across 38 countries.

INRIX put the cost of congestion at an average of £1,317 per UK driver. London and Birmingham ranked as the two most congested cities in the U.K. by with 227 and 165 hours lost due to congestion respectively.

Trevor Reed, transportation analyst at INRIX, said: ‘In order to avoid traffic congestion becoming a further drain on our economy, it is increasingly obvious that authorities need to adapt. With the help of new and innovative intelligent transportation solutions, we can begin to tackle the mobility issues we face today.’ 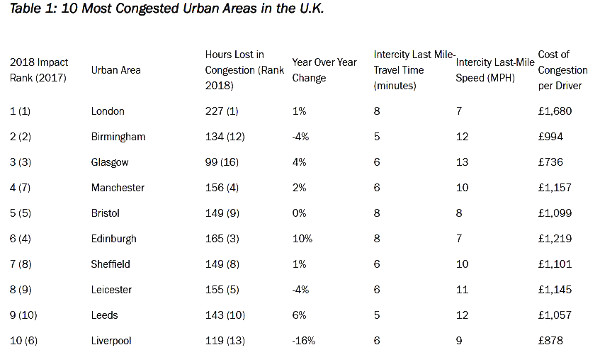 The A406 from Chiswick Roundabout to Hanger Lane topped INRIX’s list of the worst corridors in U.K., with the average driver losing 61 hours per year in congestion. The A23 and the Strand in London, Leeds Road in Leeds and the A34 in Birmingham make up the top five.

Moscow topped the list of the world’s most congested cities with 210 hours lost, followed by Istanbul, Bogota, Mexico City and São Paulo. London in sixth place was the only U.K. city in the global top 10.

A spokesperson said: ‘Today’s figures clearly show the considerable impact that traffic congestion can have on local areas, and on the UK economy as a whole – but the solution needs to be found in city halls, not Whitehall.

‘Our National Infrastructure Assessment – the first of its kind for the UK – includes recommendations to give city leaders new powers and £43bn additional funding between now and 2040 to develop and implement long-term strategies to tackle the issue, while also delivering job opportunities and much-needed new homes.’