Traffic on Britain’s roads reached yet another all-time high last year, with car, van and lorry use all increasing but bus mileage continuing to fall. 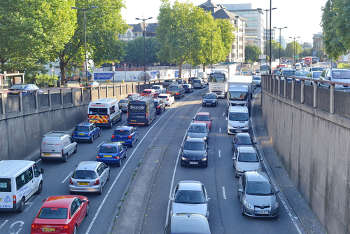 However, van traffic had the fastest growth in percentage terms, rising 2.7% to 50.5 bvm and now accounting for 15% of all motor vehicle traffic - due to in part to the increasing popularity of online shopping.

Bus and coach traffic saw the largest decrease of any vehicle type, falling by 3.4% since 2016 and more than one-quarter (28%) in the last decade.

Mileage on motorcycles and scooters fell slightly (2.8 million bvm, down 0.3%) , while 3.3 billion miles were ridden on pedal cycles in 2017. This was 3% further than in the previous year, and almost 30% more than 20 years ago.

Howard Robinson, chief executive of the Road Surface Treatments Association, said: ‘As traffic levels increase, so do the demands being placed on an under-funded road network.

‘The lack of adequate assured funding for local road maintenance has resulted in a network where one in five roads, a significant 20%, may need replacing by 2023 – and that is just to cope with current traffic levels.’

He added: ‘The Government’s own figures show how the vast majority of traffic uses the local road network. They underline the need for greater investment in long-term programmes of preventative road maintenance rather than expensive patching-up.’

As traffic has grown, the risk of fatality or injury in a road accident has fallen almost every year according to the report. Officials suggested that improvements in areas such as education, vehicle technology, highway engineering and road safety policies have contributed.

Nitrogen oxides and PM10 pollution also fell in this time.