The United Nations has backed the use of 30km/h (approx 20mph) limits as part of a worldwide drive to cut road deaths and injuries by half.

The move is part of the UN’s declaration of the second Decade of Action for Road Safety (2021-30) and follows the Stockholm Declaration at the third Global Ministerial Conference on Road Safety in February 2020.

The UN General Assembly UN has endorsed the Stockholm Declaration and adopted a target to reduce road deaths and injuries by 50% by 2030. 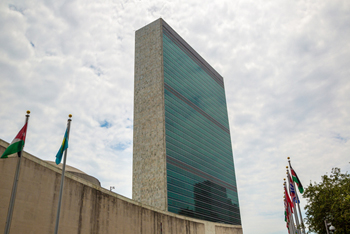 The UN building in New York

The Declaration included a resolution to focus on speed management, ‘including the strengthening of law enforcement to prevent speeding and mandate a maximum road travel speed of 30 km/h in areas where vulnerable road users and vehicles mix in a frequent and planned manner, except where strong evidence exists that higher speeds are safe'.

It noted that ‘efforts to reduce speed in general will have a beneficial impact on air quality and climate change as well as being vital to reduce road traffic deaths and injuries'.

The 20’s Plenty campaign said this was timed to benefit from the adoption of mandatory speed limiters on cars, ‘which will have a dramatic positive effect on driver compliance’.

Rod King MBE, founder and campaign director for 20’s Plenty, pointed out that the Welsh Government is already planning to cut its national urban/village default limit to 20mph.

He said: ‘This announcement lays the responsibility for setting safe and equitable default urban and village speed limits at national governments. It is no longer acceptable to have a national 30mph limit and expect local authorities to do all the work to change local limits to the accepted global standard that 20 is plenty where people walking and cycling mix with motor vehicles.

‘Just like air quality, smoking in public places, child protection and seatbelt wearing and so many other issues, where we have a national consensus and value on what is right and proper, then we should set that standard nationally.’

He added: ‘The Government has supported both the Stockholm Declaration and the UN Resolution. It’s time for England, Scotland and Northern Ireland to join Wales and set a national urban/village limit of 20mph that aligns with what is now the accepted global standard for allowable vehicle speeds where people mix with motor vehicles.’