The UN is set to urge ministers to reconsider the Stonehenge tunnel plans, including extending the tunnel so its western portal is outside the World Heritage Site (WHS) – a move the UK has rejected on cost grounds.

A February 2019 document submitted to the UNESCO World Heritage Committee by culture department DCMS states that following previous criticism of the scheme ‘consideration …has been given to extending the bored tunnel so that the western portal lies outside the western boundary of the World Heritage Site’.

However, it adds: ‘The additional construction cost is estimated at £540m and the longer tunnel would also require considerable additional annual maintenance expenditure. While understanding fully our responsibilities to the Convention, the State Party [the UK] does not believe that an increase in the estimated cost of the scheme from £1.7billion to £2.24billion for the tunnel extension, together with the additional on-going annual expenditure, can be justified.’ 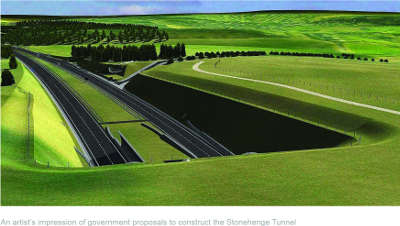 The document also states that a proposal to cover part of the road cutting within the WHS would have some beneficial effect but, that ‘the additional estimated construction cost of £126m to cover the cutting, plus the additional recurring annual maintenance costs of an extended tunnel, cannot in the view of the State Party, be regarded as reasonable’.

It puts this in the context that the scheme’s benefits to cost ratio ‘is already pushing at the limits of what can be regarded as overall public value for money’.

A provisional agenda for a meeting of the Committee starting on 30 June includes analysis by various advisory bodies, which notes that UK Government documents ‘indicate that a longer tunnel to the west, and covering of the approximately 800m long cutting, are both technically feasible but are not proceeding because of cost, perceived incremental benefits to the site’s OUV [Outstanding Universal Value], and the approach taken to measuring value for money’.

In an implicit criticism, the analysis adds: ‘There is also focus on measuring and aggregating impact on individual components of the property, particularly known archaeological features, and justification based on assessing whether the proposal is an improvement, rather than the best available outcome for the OUV of the property.’

The provisional agenda sets out a draft decision on the issue:

The Committee papers also note that the scheme is currently subject to a development consent order (DCO) application but adds that ‘previous Committee Decisions and Advisory mission recommendations are not prominently noted in the domestic DCO application processes and readily-accessible public information’.

Last month the National Audit Office warned that at a revised cost of up to £2.4bn and at £1.15 of quantified benefit for every £1 spent the tunnel risks costing more to build than the economic benefits it is expected to provide. It also noted that the ‘inherently uncertain’ cultural heritage benefits of the project make up 73% of total monetised benefits.