A local authority has thrown doubt over Highways England’s controversial plans to infill a road bridge over a former railway line without planning permission.

Eden Valley District Council in Cumbria said that Highways England had refused its request to stop the works on the bridge at Great Musgrave near Warcop.

This is despite assertions from the government-owned company that it ‘paused infilling and demolition works where local authorities have raised queries’.

In a statement, the council acknowledged that Highways England has permitted development rights to carry out certain works without the need for the prior grant of planning permission.

However, it added that its Planning Service has opened a dialogue with the company ‘to understand the full extent, nature and reasoning for the proposed works at Great Musgrave, to ascertain whether the works do fall within permitted development rights’.

‘This is an ongoing matter and discussions have not yet concluded. Once sufficient information has been provided by Highways England, the Planning Service will be able to judge whether these works do constitute a Permitted Development, or if they require the prior granting of planning permission,’ the council said. 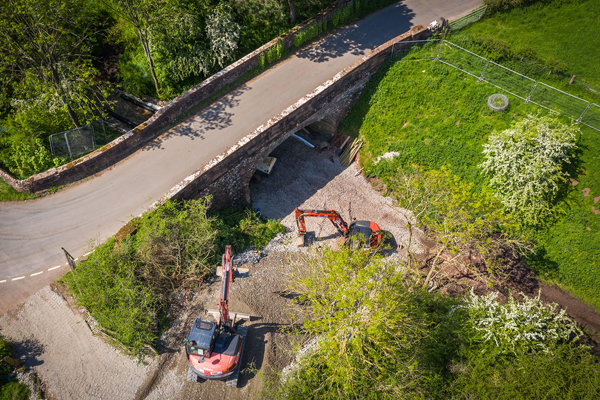 David Wheatley, Highways England’s head of scheme delivery for the HRE, said: ‘As part of our stewardship of the Historical Railway Estate, we determined the Musgrave Lane bridge - which carries the B6259 over the old railway line - needed strengthening to safeguard the road’s absolutely vital role in connecting local communities like Warcop and Great Musgrave.

‘We have complied with any planning requirements and have consulted widely – including with Eden Valley District Council, Sustrans and the Eden Valley Railway Company – on our plans to strengthen the bridge with an infilling scheme which we aim to complete this financial year.’

The HRE Group, which campaigns against the infilling and demolition of parts of the Historical Railway Estate (HRE), said Highways England ‘has contrived an alternative reality to drive through the scheme’.

The group has also disputed Highways England’s assertion that the work is necessary, arguing that according to Highways England’s own inspection reports, the bridge is in ‘fair’ condition, shows no signs of being overloaded and has no significant defects.

It added that although the structure was assessed in 1998 as having a capacity of 17 tonnes, vehicles over 18 tonnes are unable to make journeys via the bridge because of an existing weight limit nearby.

Highways approached Highways England for further comment on its assertion that it is necessary to strengthen the bridge.

Campaigners have said the route under the bridge is needed for a connection between the Eden Valley and Stainmore railways, ‘whose longstanding ambition is to unite their operations and establish an 11-mile heritage line’.

Although Highways England has stated that the infilling is reversible, the HRE Group argued that if it is completed, the blockage will be too difficult and costly to remove.

The group has disputed Highways England’s statement that it has consulted with the Eden Valley Railway Company and local press reports suggest that both railway companies opposed the work.