Cycling UK has won the right to challenge a council’s decision to remove a popular cycle lane after a High Court ruling refusing permission for a judicial review was overturned.

The charity has said that during its brief existence, the cycle lane on the A270 Upper Shoreham Road was used for more than 30,000 cycle trips, many servicing the five schools along its length. 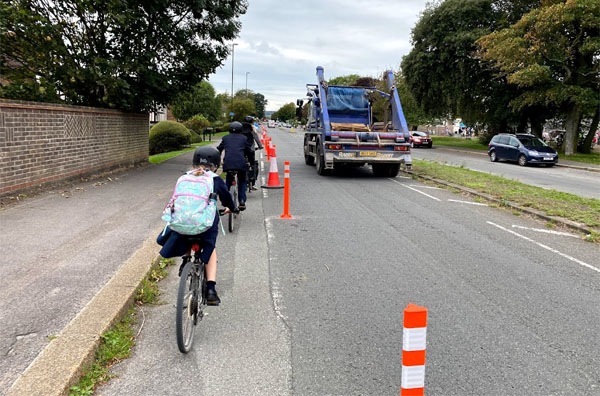 The cycle lane also featured in a government publicity video highlighting the community benefits of the new cycle lanes introduced during lockdown in 2020.

Cycling UK applied for a judicial review of West Sussex County Council's decision in February and after an initial refusal in the High Court in May, it appealed to the Court of Appeal. With the earlier decision overturned the judicial review can now be heard.

The charity now hopes to have the final hearing before the end of the year and in the meantime is asking for donations to support its legal costs via its Cyclists’ Defence Fund.

It described the action as a ‘landmark case’, adding that it is increasingly concerned by other councils ignoring government guidance to promote active travel and reallocate road space for cycling and walking. It is seeking to set a precedent on the issue.

Head of campaigns Duncan Dollimore said: ‘Cycling UK is delighted the Court of Appeal agreed that the issues raised in this case, especially the requirement for highway authorities to properly consider the government’s statutory guidance, must be fully considered.

‘This case has implications beyond Shoreham, because if councils can ignore this guidance with impunity, the Government’s Gear Change vision to get more people walking and cycling will be stuck in first gear.’

A West Sussex CC spokesperson told Highways: 'We are currently considering the Court of Appeal’s decision to allow elements of Cycling UK’s case to proceed and its implications before deciding our next steps.

'As promised when the decision to remove the temporary cycleway was made, we have recently consulted on proposals for a permanent solution for the road and our officers continue to analyse the results. We would like to thank all those for taking part and providing feedback.'