Only half of the cameras capable of enforcing violations of lane closures on smart motorways are fully operational, a year and a half after a change in the law made it possible for camera evidence to be used for prosecutions. 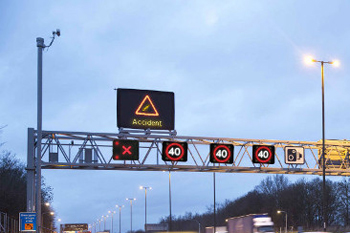 The government-owned company has now admitted that only ‘around half’ of the Hadecs 3 cameras are currently capable of detecting red X violations, the Times said.

Highways England told Highways that the programme to upgrade cameras to HADEC 3X, involving changes to the cameras and software as well as police processing systems, would be completed ‘by July 2023’.

It added that the roll-out has been slightly delayed due to COVID-19 as it has meant some systems could not be physically tested and upgraded cameras commissioned.

However, this date is four years since the law was changed in June 2019 to allow camera evidence and seven and a half years since Highways England said it would seek to have the law changed. That process also involved getting Home Office type approval for the cameras.

A Highways England spokesperson said: 'Red X signals are there to indicate a lane is closed and protect the safety of workers, the police, emergency services and the public. It has always been illegal to drive in a lane closed by a red X and the vast majority of drivers adhere to the signals.

'All our safety cameras are capable of detecting speeding offences and changes in legislation mean that our cameras can also be used to detect and deter red X non-compliance.'

AA president Edmund King said: ‘One premise of smart motorways is that the technology is meant to make them safer. Having red X technology without widespread enforcement may undermine the effectiveness of the whole system.

‘Most drivers will still abide by the red X but a minority of drivers, if they believe they will get away with it, will continue to put other drivers are risk by ignoring the red X warning.

‘Widespread enforcement is needed as soon as possible or more lives will be put at risk as 38% of breakdowns on smart motorways happen in live lanes.’