Keltbray has won the contract to deliver improvement works on the £49.8m M621 Junctions 1 to 7 Scheme for National Highways.

The M621 is an urban motorway that runs through the Southern half of Leeds from Junction 27 of the M62 to Junction 43 of the M1.

The works were originally announced under the 2015-20 Road Investment Strategy. 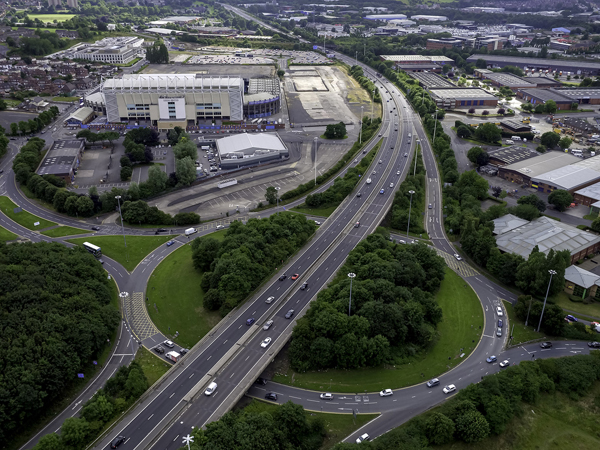 Junction 2 of the M621 with the Elland Road stadium

They include construction of additional lanes at the Junction 2 roundabout and Junction 3 westbound, as well as between junctions 1 and 3 by converting two short sections of hard shoulder into an additional lane for traffic.

Junction 3 westbound will also be altered to give priority to the main M621 traffic, allowing it to flow more freely. Changes at this junction will also remove conflicts where the traffic merges in this area including permanently closing westbound exit slip road of junction 2a which aims to reduce the risk of collisions resulting from the short distance between junctions 3 and 2a.

National Highways said new technology will also be installed between Junctions 1 and 7 which will detect incidents and help it respond quicker and get traffic flowing sooner but it is not labelling the scheme a smart motorway.

‘We look forward to working in partnership with National Highways as we commence works over the coming months and continue developing our reputation in the highways and civils market.’

National Highways project manager James Finnigan said: ‘The improvements will create more reliable journeys for everyone using the M621, making sure more people get to where they need to go safely.’

Main construction works are due to start in August 2022 to run until summer 2024.