Leeds City Council is due to begin major works next week that aim to reduce congestion on the M62 near the city.

This scheme aims to address problems at peak times on this section of the road. It is being funded by Highways England as part of a nationwide £220m Congestion Relief Fund that was announced by the Government last year but will be delivered by Leeds City Council.

Richard Lewis, the council’s executive member for regeneration, transport and planning, said: ‘Adding road capacity will ease congestion, improve journey times, reliability and also will reduce emissions levels so will be better for the environment.’

The two-phase scheme starting on Monday (23 July) will upgrade roundabouts and slip roads at Junction 27 for Gildersome. The westbound exit slip roads from the M62 and M621 will be widened to three lanes to provide additional capacity on the roundabout, aiming to improve access to Birstall and the surrounding business parks. 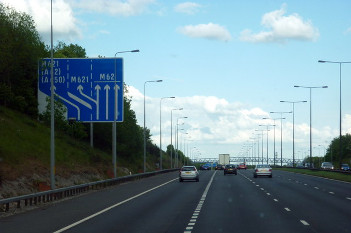 At both junctions road markings and road signs will be improved and replaced and the slip roads and roundabouts will be resurfaced.

Although the project page on the Highways England Website does not give a cost for the project, a Government announcement last year stated that the two phases will cost an estimated £2.65m and £2.25m respectively.

Drivers have been advised to leave extra time for journeys while the work, which is due to finish next spring, is taking place.

The westbound exit slip roads from the M62 and M621 will be reduced to one lane and the speed limit will be reduced from 70mph to 50mph. There will also be some road closures overnight between 8pm until 6am, which will be signed in advance.