A new report has examined the relationship between road infrastructure and safety for conventional and increasingly autonomous vehicles and provides a framework for infrastructure safety investment.

The study from the Road Safety Foundation considers the implications of the switch to autonomous vehicles (AVs) working around the assumption that half of car travel in about 30 to 40 years will be driverless.

According to the analysis driverless cars could cut run-off crashes by up to 80% over the next two generations using in-vehicle good lane-keeping control, speed control but only with good signing and road markings.

These may be the easiest crashes to prevent in cars that can ‘read’ road signs and white lines, but worn out road markings are easily missed by AV detection technology.

This is the third in the Roads that Cars Can Read series, is a joint initiative of EuroRAP, the UK Road Safety Foundation and International Road Assessment Programme (iRAP).

A senior figure in road marking commented that fully autonomous cars on the local road network could be a ‘distant dream’ as they struggle to read worn out road markings. 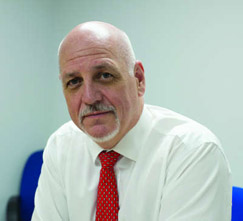 Commenting on the report, Stu McInroy (pictured), chief executive of the Road Safety Markings Association (RSMA) said: ‘Increasing automation currently relies on clear road line markings and signs that can be reliably detected. But one of the greatest challenges is the UK’s network of underinvested local authority-maintained roads.

‘A fully funded road marking programme is pivotal to successful implementation of these vehicles. With more than 200 local authorities – each with different pressures and squeezed budgets – fully autonomous cars on anything but strategic roads looks like a distant dream.’

He added: ‘Monitoring and maintaining road markings is a vital part of well managed roads. Only when we have roads that cars can read, reliably, can we truly have a high level of vehicle autonomy.’

The report says that infrastructure maintenance will be a key factor in the AV transition phase. It will also become a higher-priority obligation for road authorities as driver liability will decrease, and the liability of road authorities and vehicle manufacturers is likely to rise.

The RSMA will be located in the Partners' Lounge at Traffex Seeing Is Believing in Bruntingthorpe, Leicestershire on 27 and 28 June, where copies of the report will be available.

An interview with Mr McInroy appears in the June issue of Highways magazine.