Drainage from a bridge that carries the M27 over a river threatens ‘an ecological disaster’, National Highways has been warned, but despite the concerns the strategic operator said there was no cash to carry out improvements.

Sean Woodward, chairman of the River Hamble Harbour Board, who is also a councillor on Hampshire County Council, said: 'This issue has been a concern for decades now, because the drainage is literally just pipes through the bridge that lead straight into the River Hamble. 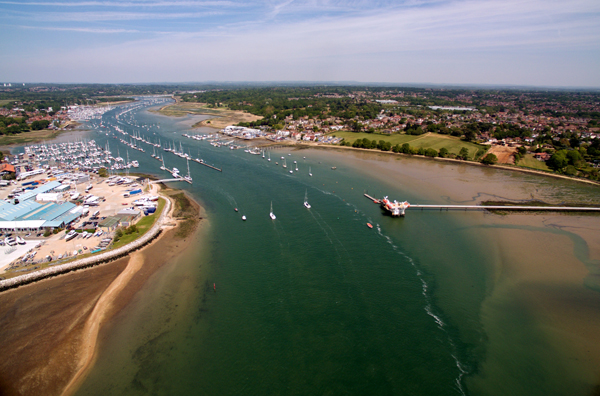 'The worst case scenario here would be that thousands of gallons of petrol or diesel could pour into the river in the event of an accident - it's an ecological disaster waiting to happen.

‘We have to prepare a drainage system to ensure this doesn't happen, and we need to do that sooner rather than later.

‘The bottom line is that this remains a huge environmental concern for us - we haven't had a disaster yet, but we'd also like to keep it that way.’

National Highways had planned a two-phase approach to the threat, with the first phase carried during its smart motorway conversion works, which have a price tag of £244m.

This would have seen outfall pipes amended so that they discharge onto the foreshore, with a possible second phase involving a pollution control system that could contain large spillages from an accident from the bridge.

However, National Highways subsequently stated that the cost for the first phase quoted by its contractor exceeded the available cash, which had been secured from the Environment designated fund under the first (2015-20) Road Investment Strategy.

The M27 smart motorway scheme will see all links from Junction 4 (M3 Interchange) to Junction 11 (Fareham) upgraded to all-lane running, except between junctions 7 and 8, where the hard shoulder will be retained.

The scheme was originally due to open last summer but this has been delayed until the spring so that stopped vehicle detection can be installed.

National Highways had initially told stakeholders, including Hampshire CC and the Harbour Board, that it planned to deliver works to move the outfall as part of the scheme and had secured funding. However, in 2020 Highways England (as it was then called) said the cash had been returned to the central pot as the cost of the work was too high.

It added that carrying it out as part of the smart motorway works risked adding to the time and work pressures on the scheme and said it would consider whether funding was available under the second (2020-25) roads period.

In February 2021 National Highways’ route manager, Greg Stone, acknowledged that it ‘has a duty to uphold our environmental standards which includes drainage and pollution issues from the M27 bridge into the River Hamble’.

Responding to Cllr Woodward’s comments, Mr Stone told Highways: ‘It remains our intention to deliver improvements to the drainage in the area. We will continue to work with the Environment Agency to try and find the right solution to this issue.’

A spokesperson for the Environment Agency was unable to state what its involvement in the issue had been.