'Nothing to see,' council says after bridge incident

Leeds City Council has said a full investigation is underway to establish why a large concrete section of a demolished bridge crashed to the ground after being ‘safely placed’ on a trailer for removal.

Initial reports had incorrectly suggested that the concrete beam had been dropped by a crane but the council said there had been a ‘failure of the trailer’, which had caused it ‘to shift from its resting position’.

Huge 120-tonne bridge slips off back of lorry trailer after being lifted by crane during work on new flyover in Leeds city centre
via https://t.co/SoLYFq4fjs https://t.co/ZhubVRZkdf

The incident relates to major work in the city centre to demolish and rebuild the Regent Street flyover, which carries the A64 over the A61. Part of the northern section was placed on a trailer to be removed and disposed of.

The council said after the incident that the beam had been ‘safely placed' onto the heavy load vehicle but that ‘there was failure of the trailer, causing the piece of bridge to shift from its resting position’.

It added that there were no accidents or injuries as a consequence of the trailer system failing. On Monday a council spokesperson said: ‘The beam was broken down on site on Saturday and then transferred by wagons to be recycled. The specialist vehicle that the beam was loaded on to was not seriously damaged and there was no damage to the carriageway.

‘The incident has caused no delays to the project and the main operations over the weekend went as expected and both roads A64M and A61 were reopened earlier than expected.’ 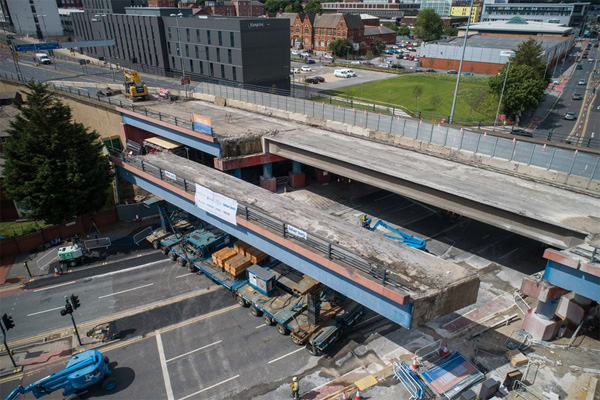 Work to demolish and rebuild the flyover began a year ago on the southern section (above), with work on the northern section beginning this month.